Join us for virtual author hour with Lindsay Gardner, author of Why We Cook: Women on Food, Identity, and Connection, in a panel conversation with some of the book's Bay Area contributors on Tuesday, May 4h at 6:00PM PT! Panelists include Maryam Ahmed, Stevie Stacionis, Tanya Holland, and Lizzie Binder.

This is a free event. If you are able, a donation of $5 is suggested to help us cover costs. Donate here.

You can also pre-order a copy of Why We Cook: Women on Food, Identity, and Connection below. 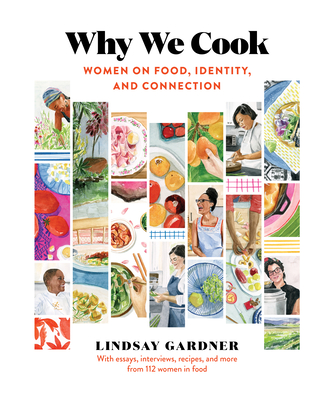 With more than one hundred women restaurateurs, activists, food writers, professional chefs, and home cooks—all of whom are changing the world of food. Featuring essays, profiles, recipes, and more, Why We Cook is curated and illustrated by author and artist Lindsay Gardner, whose visual storytelling gifts bring nuance and insight into their words and their work, revealing the power of food to nourish, uplift, inspire curiosity, and effect change. 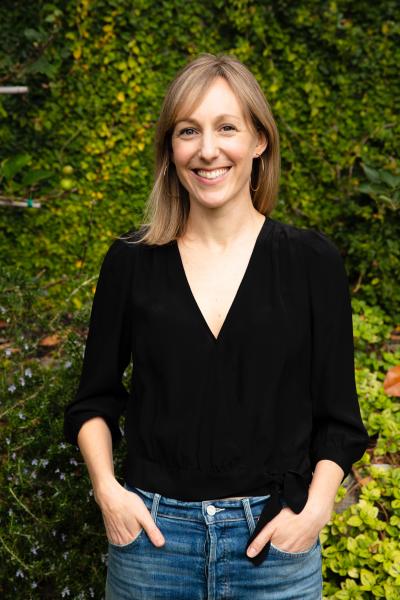 Lindsay Gardner is an illustrator and mother of two daughters (her favorite sous chefs). Her watercolor and gouache illustrations have appeared in cookbooks and editorial projects, advertising campaigns, and stationery and interior design collaborations. This wide-ranging artistic sensibility makes her a gentle interrogator of the world around her. Her food art has appeared in Cookie Advent Cookbook (Chronicle, 2016), Pies, Fries & Ice Cream (Chronicle, 2016), and The Rituals (Chronicle, 2019). You may have also seen her work in Uppercase Magazine, Architectural Digest, StyleCarrot, Decorist, and Vogue, among others. Originally from Grand Rapids, Michigan, she’s been fortunate to live in the beautiful and vibrant locales of Oakland and San Francisco, CA, Chicago, IL, New York, NY, and Middlebury, VT. 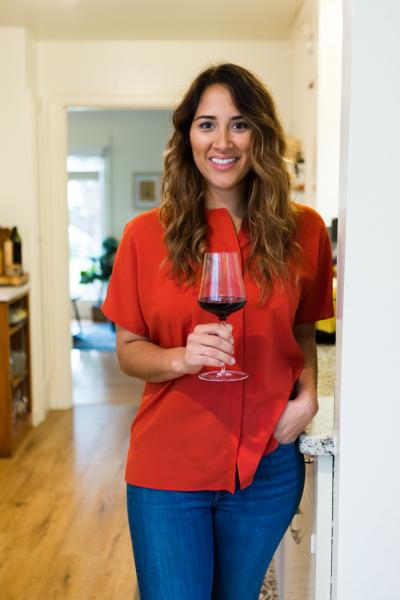 Maryam has spent over ten years in the hospitality industry with a focus on the world of food and wine. Before building Maryam + Company, her collaborative consulting firm, she spent five years as a director and intrapreneur at the Culinary Institute of America. Maryam’s team of thirty created unique educational and experiential programs for the public and the wine trade. Most often, Maryam's work takes place at the intersection of chefs, sommeliers, activists, sustainability experts, creatives, and organizations focused on equitable access and diversity within their communities. Maryam is a graduate of Cornell’s Hotel School (2011) and the Walla Walla Enology & Viticulture program (2015). She is an active member of the San Francisco Chapter of Les Dames d’Escoffier, a member of the board of The Symposium for Professional Wine Writers, and the creator of the biannual Diversity in Wine Leadership Forum. 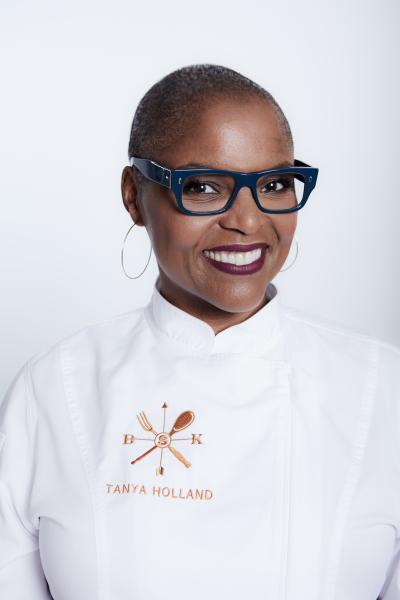 Acclaimed for her inventive take on modern soul food, as well as comfort classics, Tanya Holland is the Executive Chef/Owner of the internationally renowned and beloved Brown Sugar Kitchen restaurant, located in Oakland, CA. The author of The Brown Sugar Kitchen Cookbook and New Soul Cooking, Holland competed on the 15th season of Top Chef on Bravo, appears on the new HBO Max show Selena + Chef featuring Selena Gomez and is the host of OWN’s Tanya’s Kitchen Table. In 2020, Holland launched “Tanya’s Table” podcast with MuddHouse Media. She is on the Board of Trustees for the James Beard Foundation, and Brown Sugar Kitchen has received multiple Michelin Bib Gourmand awards. Additionally, she has teamed up with Oakland Museum of California (OMCA) to create a new café concept for the Museum: Town Fare by Tanya Holland in 2021. She is an in-demand public speaker and lecturer who frequently leads the conversation on inclusion and equity in the hospitality industry. 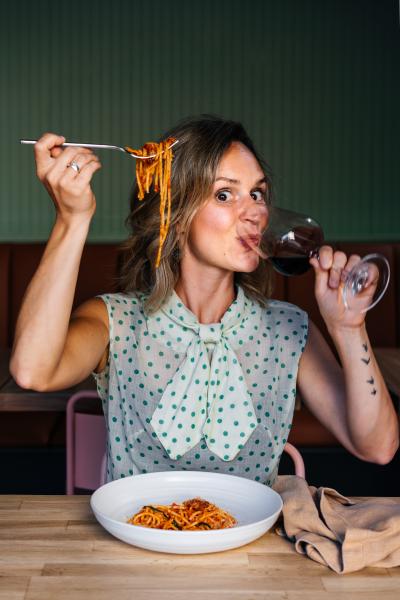 In addition to her editorial background, she worked in wine retail and copywriting, managing communication, media, marketing and brand management for New York City’s Alphabet City Wine Co., Crush Wine & Spirits, Corkbuzz Wine Studio, and the Guild of Sommeliers. Stevie is a Certified Sommelier and founder of the Bâtonnage Forum addressing issues faced by women in the wine industry. She co-owns the acclaimed Bay Grape wine shop in Oakland and Napa along with MAMA Oakland restaurant. Most importantly, she's a kick-ass mom to her miracle son. 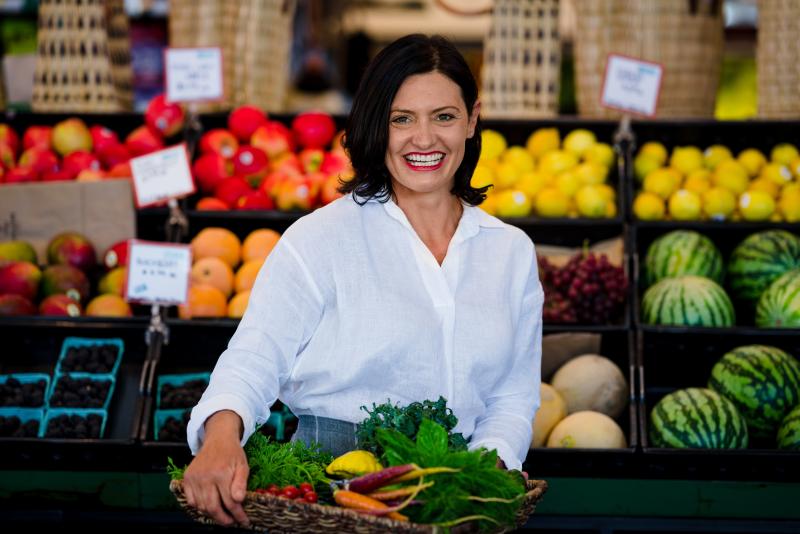 Executive Chef Elizabeth Binder was born and raised in South Africa, inspired by her fisherman father and great entertaining grandmother’s, she attended the internationally recognized Christina Martin School of Food and Wine in her hometown of Durban.

After graduating, she landed her first cooking job at the small luxury hotel, Blue Mountain Lodge near the Kruger Park, where she was quickly promoted to head chef at the tender age of nineteen. At Blue Mountain, her reputation rose as she cooked state dinners for both F.W. de Klerk and Nelson Mandela at a pivotal point in South African history.

In 1995, Elizabeth packed her bags to embark on a career that would take her around the world. Her first stop was the UK where she worked for Sir Terrence Conran’s, Del Ponte and at Clarke’s, owned by Alice Waters’ protege Sally Clarke. Subsequent travels took her around the globe – from the French Alps to Sydney, Australia – further deepening her knowledge of cuisine and international kitchens.

While in Sydney, Australia she spent time in the kitchens of Niel Perry’s, Rockpool and Dietmar Sawyer’s, Forty One Restaurant before taking over as executive chef of Plissee, a popular restaurant / cafe in the rag trade district of Surry Hills.

Seeking her next culinary adventure, she headed to the United States where she fell in love with San Francisco. Her work in San Francisco has seen her be part of the amazing and talented Traci des Jardin’s team at Jardiniere. Working along side and under other incredible chefs like, Douglas Keane (Cyrus Restaurant), Richard Reddington (Redd), Tamalpais Roth-MacCormick (Bunches & Bunches LTD) and Loretta Kellar (Bizou / Coco 500), with cooking stints at both The French Laundry and Chez Panisse.

In 2006, after the birth of her first child, Elizabeth met business partner, Christopher Losa. The two worked hand-in-hand to open the Italian-inspired Bar Bambino, which in six short years became one of the most recognized and awarded restaurants in San Francisco’s Mission District. At Bar Bambino, she was able to realize her concept of rustically elegant cuisine and combine finesse with respect for local, fresh, and extraordinary ingredients.

Elizabeth is currently the Chef / Owner of successful Hand-Crafted Catering, a boutique food and wine pairing event company based in the Napa Valley. Where she resides with her chef husband and two children. Television appearances include competing on Top Chef: Seattle, the tenth season of the Emmy and James Beard Award-winning series and recently beating Bobby Flay on Beat Bobby Flay.

Why We Cook: Women on Food, Identity, and Connection (Hardcover)

With more than one hundred women restaurateurs, activists, food writers, professional chefs, and home cooks—all of whom are changing the world of food.