Join Napa Bookmine on Tuesday, October 27th at 7:00PM PDT for a Virtual Author Hour with Suzanne McConnell to discuss the new paperback edition of Pity the Reader: On Writing With Style (co-authored with Kurt Vonnegut). The paperback edition is similar to the hardcover edition, with the exception of a new "Practices" section at the end to encourage readers to explore Vonnegut's writing rules themselves.

During the event, Suzanne will take us through one of these "Practices." If you'd like to prepare ahead of time, please read the prompt below based on "Chapter 27: Prose, the Audial" (p.233-248):

Throughout his work, Vonnegut conjured and indicted words. For example, "[Dr. Ed Brown] coined a new word for Sylvia’s disease, 'Samaritrophia,' which he said meant, 'hysterical indifference to the troubles of those less fortunate than oneself.'

As with Vonnegut's "Samaritrophia," invent a noun and definition for a phenomenon which has, as yet, no defining word. Make its sound echo its sense. Employ it in a sentence.

To help us offset costs, you can also purchase Suzanne's book in advance here. 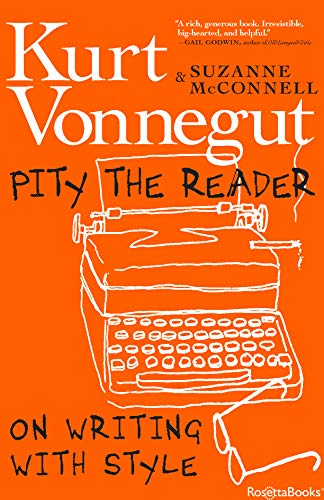 Kurt Vonnegut used to like to say, "Practicing an art form is a way to grow your soul." He would screw up his lips into a prune face after he said this because of how important he believed this idea to be. Pity the Reader is the very embodiment of that idea, a book about writing and life and why the two go together.

It includes rare photos and reproductions, Vonnegut's own account in his own words of how he became a writer and why it matters, and previously untold stories by and about Vonnegut as teacher and friend.

It turns out he was generous to a fault about students' writing, idiosyncratic, a bit tortured and always creative as a teacher, and here in this book that portrait becomes our gateway into getting to know Kurt Vonnegut better than we ever have before as a human being.

Vonnegut recounts that his favorite work of art among all those his children produced "so far" is a letter his daughter Nanette wrote to a disgruntled customer, after he had tormented a new waitress at the restaurant where she had just started working, and then he shares the letter with us. Thus he illustrates his first writing rule: "Find a subject you care about." This book is full of such rare, intimately teachable moments, and they add up to something special. Pity the Reader indeed.

Author, editor, and writing teacher Suzanne McConnell was a student of Kurt Vonnegut’s at the Iowa Writers’ Workshop from 1965 to 1967, when Vonnegut—along with Nelson Algren and other notable authors—was in residence and finishing his masterpiece, Slaughterhouse-Five. Vonnegut and McConnell became friends, and stayed so for the rest of his life. She has published short memoirs of him in the Brooklyn Railand the Writer’s Digest, and led a panel at the 2014 AWP conference titled “Vonnegut’s Legacy: Writing About War and Other Debacles of the Human Condition.” McConnell taught writing at Hunter College for thirty years, and she serves as the fiction editor of the Bellevue Literary Review. Twice nominated for the Pushcart Prize, her fiction also won first prize in the New Ohio Review’s 2015 Fiction Contest, first prize in Prime Number Magazine’s 2014 Awards for Flash Fiction, and second prize in So to Speak’s 2008 Fiction Contest. She lives in New York City and Wellfleet, Massachusetts, with her husband, the artist Gary Kuehn.

Kurt Vonnegut was one of the few grandmasters of American literature, whose novels continue to influence new generations about the ways in which our imaginations can help us to live. Few aspects of his contribution have not been plumbed—fourteen novels, a collection of his speeches, essays, letters, a play—so this fresh self-portrait, written with the aid of a former student, is a bonanza for writers and readers everywhere.

Pity the Reader: On Writing with Style (Paperback)

Kurt Vonnegut used to like to say, "Practicing an art form is a way to grow your soul." He would screw up his lips into a prune face after he said this because of how important he believed this idea to be. Pity the Reader is the very embodiment of that idea, a book about writing and life and why the two go together.