Boldly and unapologetically told, the essays featured in this powerful collection exemplify strength and resilience as these writers—published authors as well as fresh voices—take their truths public. Filled with hope, humor, and determination, these stories tackle love, loss, friendship, identity, and parenthood. She’s Got This! is their anthem, one that will resonate with women everywhere.

“I tore through the wonderful essays in She’s Got This! They’re funny, heartbreaking, profound, gutsy, sexy, thrilling, and inspiring. And they’re wonderfully written, with grace and depth. Each essay tells one woman’s heroic story; the collection reveals the fierce and beautiful face of feminism.”  —Ellen Sussman, New York Times best-selling author of French Lessons 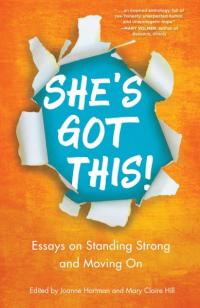 Vicki DeArmon has 30 years in the book publishing industry, as a publisher and a bookseller, and currently as an event producer. She’s also a writer of fiction and essays usually on topics that she admits are way too personal and revealing for public consumption. She's Got This! published them anyway.

Claire Hennessy is endlessly editing her humorous memoir about how she and her first boyfriend reunited after not seeing each other for thirty years. She is hoping to finish and publish before being too old to go on a book tour. A founding member of Write on Mamas, she has been published in the anthologies Mamas Write and Nothing But The Truth So Help Me God: 73 Women on Life’s Transitions. She has also performed her work at San Francisco’s Litquake and Lit Crawl, as well as at Listen to Your Mother.

Sheri Hoffmann is married with two children, and lives in Benicia. She left her corporate job because it depleted her soul. Now she writes about the ridiculous, the mundane and the bittersweet of life. She was a cast member at the 2015 Listen To Your Mother, and is a speaker in her workshop series about Boundaries, inspiring others to go from Constant Yes to Contented Yes.

Christina Julian is a wine and food columnist, novelist, and mama to toddling twins. Her writing has appeared in the San Francisco Chronicle, Wine Enthusiast, Bohemian, Weddings California, North Bay Biz, and beyond. Her debut novel, The Dating Bender, was a 2017 Best Book Awards finalist. As a journalist, Christina has been lucky enough to interview Matthew McConaughey, Will Ferrell, Colin Farrell, Viggo Mortensen, Kurt Russell, John Travolta, Nancy Meyers and Kevin Costner, while covering the Napa Valley Film Festival. She recently jumped into the world of children’s literature and is currently shopping two picture books filled with a whole lot of heart and humor.

Teri Stevens is the current president and a founding member of Write on Mamas. She was selected to participate in the Society of Children’s Book Writer’s and Illustrators 2018 Mentor Program and is revising her middle grade mystery. She also writes for Napa’s Marketplace Magazine. Teri lives in Napa with her husband, eleven year-old son and twin eleven-year-old daughters.

Rina Faletti is a writer and teacher with an MFA in creative writing from American University and an MA and PhD in art history from the University of Texas at Austin. She writes memoir, poetry, creative nonfiction, and about California environmental history. As an art exhibition curator, she organizes exhibitions that respond to environmental crises. Her most recent exhibit, “Art Responds: The Wine Country Fires,” is a one-year invitational anniversary of the 2017 Napa-Sonoma firestorms, from which she and her family were long-term evacuees.