Our in-person tickets are sold out but we will be live streaming this event on Zoom! Register here to receive the Zoom meeting information. 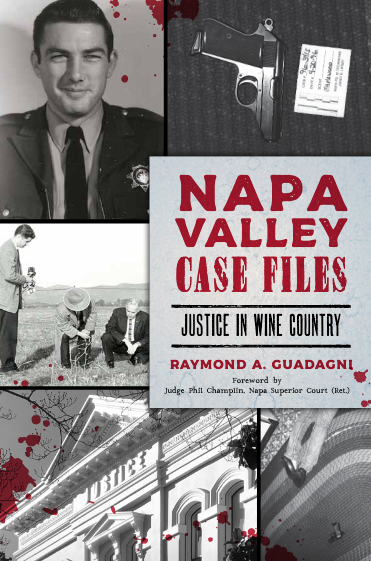 Well known for its picturesque setting, Napa Valley is also home to crimes perpetrated in the name of greed, love and rage.

Shocking incidents have rocked the small communities nestled among the vineyards, like that of greedy young Billy Duvall, who killed his parents as they slept, and Bob Edwards, who suffocated his beloved wife in a misguided attempt to keep a promise. Two victims of domestic violence came to very different ends--one murdered and the other offered a second chance at life after a jail sentence.

Join author and retired Napa Superior Court judge Raymond A. Guadagni as he offers his unique perspective on these notorious court cases and the criminal justice system.

Raymond A. Guadagni presided over the Anita Andrews murder trial in 2011. Raised in Napa, California, he is a graduate of the University of California–Berkeley and Hastings College of Law. He practiced as a deputy public defender before returning to Napa in 1975 to establish a law practice. On November 1, 1995, he became Napa’s first Superior Court commissioner, and in 2001, he was appointed a Superior Court judge. He retired in 2012 and is now with the Assigned Judges Program of California. He is married, with two daughters and five grandchildren, and enjoys writing, music and travel.

By Raymond a. Guadagni, Judge Phil Champlin (Foreword by)
$21.99

Well known for its picturesque setting, Napa Valley is also home to crimes perpetrated in the name of greed, love and rage.