Register HERE for this free event.

ALL BOOKS WILL BE SOLD AT THE EVENT. IF YOU ARE UNABLE TO ATTEND AND WOULD LIKE TO PURCHASE ANY OF THE BOOKS, EMAIL US AT read@napabookmine.com. 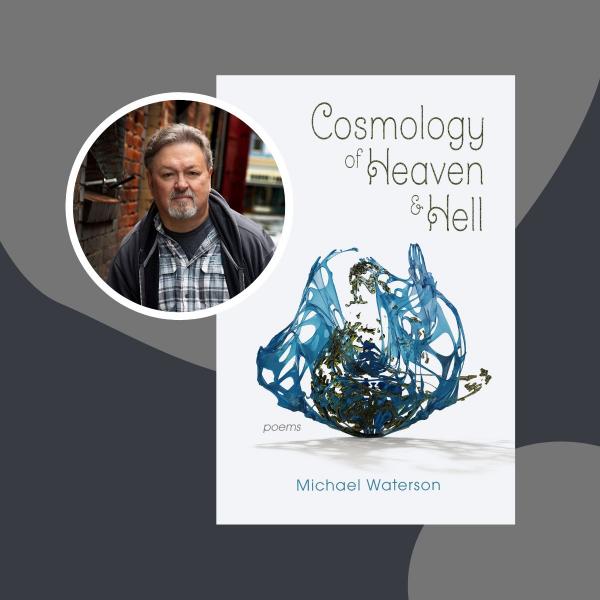 Born and raised in Pittsburgh, PA in the sulfurous glow of Blake’s Satanic mills, Waterson got gob-smacked by language at an early age, rapt by the wizardry of Shakespeare, the Celtic spells of Yeats. Growing up Roman Catholic in a place characterized as “hell with the lid off” colored his life in ways he’s still discovering after seven decades.

ABOUT THE COSMOLOGY OF HEAVEN & HELL BY MICHAEL WATERSON

The poems in Cosmology of Heaven & Hell were written over a span of four decades and set in locations from the Maritime Provinces of Canada to California and beyond. Subjects range from the deeply personal to political and cultural figures and events employing both traditional forms, sonnets and villanelles, as well as free verse. Throughout the collection there exists an overarching theme that hell exists in different manifestations—all of which is tempered by the author’s deliciously dark humor.

Tess Hamilton’s desire to write began as a child. Her father would share his exceptional imagination and his love and encouragement for Tess to pursue her dreams, however distant they may seem. While he pounded away on his manual typewriter, striking each key with intense enthusiasm along with a particular gleam in his eyes, he entranced Tess. His image is firmly embedded in her memory forever.

ABOUT THOUGHTS OF LIVING BY TESS HAMILTON

A Memoir swirling from beneath the San Francisco tides, intertwined with the music of the 70’s, to Tess’s awaited passion in the streets of Brazil. At the age of three, she is confronted with the death of her two-year-old brother and events follow with the incarceration of her father. An underlying character develops throughout the book propelling her to face many truths in a man’s world.

In Reappear, Tess Hamilton weaves in and out of memories, from the traditions of her Brazilian past, to a kaleidoscope of vistas, resting somewhere between space and time. Refocusing her camera lens, slowly receding from the sparkling tides of the San Francisco Bay, she finds herself in California’s Golden West, shadowing the Sierra Nevada Mountains. Historical towns create new platforms as Tess embarks

Luisa Coll-Pardo Heymann grew up in Washington, DC and nearby Bethesda, Maryland, but hit the road in her 20s, eventually visiting and occasionally working in 43 states and 39 countries. Over the years she's worked at running an ice cream parlor in Vieques, Puerto Rico, as a Peace Corps Volunteer in Costa Rica, and as the advertising director for Kitchen Bazaar gourmet housewares stores.

A﻿BOUT GET A MOVE ON!

Get A Move On! Mini-Workouts Anytime Anywhere is a realistic where-to-begin guide for anyone recovering from an illness or injury, a do-able starting point on the road to better health for anyone who’s sedentary—regardless of the reason—and a wealth of ideas and information for enthusiastic exercisers who want to do more but already stressing their joints to the max. No gym? No problem!

I am a survivor , widow, and servant leader. From owning a successful dental practice to receiving a Master Award from the Academy of General Dentistry. I have dominated the dentistry world in California for over 30 years . I am a graduate of USC Dental School in Los Angeles and a community advocate. When I am not providing dental care, I am a volunteer a sister, and a friend.

What happens when you survive the worst day in your life? Sophia woke one morning with her home in flames and her life as she knew it , forever changed. Her soul-mate was gone and all she had left were letters and clues f rom him urging her to never stop growing, to never forget the lessons that he taught her about living in the wilderness . An extraordinary story about learning how to live again with the most basic of supplies and a desire to prove to herself that she can survive on her own. 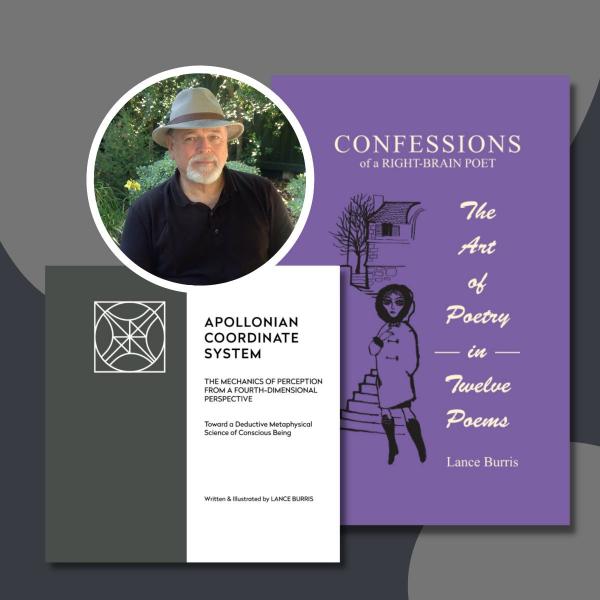 Lance Burris is a writer and painter with deep family roots in the Napa and Sonoma Valleys. He presently resides in the city of Napa where he has written and illustrated eight books.

A﻿BOUT CONFESSIONS OF A RIGHT BRAIN POET BY LANCE BURRIS

Confessions of a Right-Brain Poet. The Art of Poetry in Twelve Poems. This is not a “how to book.” Rather, it is intended to kindle the poetic spirit in others by example. The book contains essays of the art of poetry writing and twelve poems with related backstories which demonstrate the poetic spirit at work. Many of the poems, such as The Burning of Wolf House and When the Big Band Plays Rio Nido describe historical events from a local perspective.

Apollonian Coordinate System, the Mechanics of Perception from a Fourth-Dimensional Perspective. Toward a Deductive Metaphysical Science of Conscious Being. As the title suggests, this is a book of philosophy. It uses the principles of four-dimensional geometry and the mathematics of the infinite to make the case that, in the words of Jesuit philosopher Pierre Teilhard de Chardin, “we are spiritual beings having a physical experience rather than physical beings having a spiritual experience.” Lance has developed a new coordinate system and a set of color-coded, conceptual icons which make the mathematics accessible to the general reader.