Please join us for another cookbook happy hour with the author of East Bay Cooks! Snacks and wine (21+ only) will be provided!

With recipes from over forty of the East Bay’s most creative chefs, this beautifully designed cookbook is an entrée into one of the nation’s most dynamic food scenes.

The East Bay has always remained true to itself. It includes Oakland, the most ethnically diverse population in the nation; Berkeley, the birthplace of the Free Speech Movement; the island of Alameda, with its artisan breweries, wineries, and distilleries; and the Livermore Valley, one of California’s oldest winemaking regions.

East Bay Cooks is an impressive collection of eighty signature dishes from forty of the city’s leading restaurants. It’s a region that’s got you covered, no matter what the craving. An uncomplicated taco with the power to stir the soul? A nourishing bowl of authentic Singaporean laksa? Shrimp and grits with layers of flavors never imagined? It’s all here, and designed with home cooks in mind, so that re-creating signature dishes from the area’s favorite chefs has never been easier.

Carolyn will be joined by Chef Francis Hogan of Sabio on Main in Pleasanton and Chef Loren Goodwin of Oakland's The Gastropig, who will be bringing treats from their restaurants! 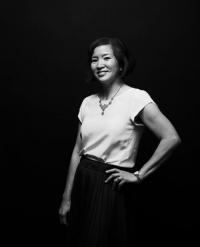 “Finally, a book that spotlights the bootstrap, high-flying, gung-ho spirit that’s shaped the culinary creativity of the long-overlooked East Bay. Veteran food writer Carolyn Jung beautifully captures the stories of the people and savors that have made the region an exciting multicultural force in the food world.”  —Andrea Nguyen, James Beard Award-winning author

Carolyn Jung is a James Beard Award–winning food writer and blogger based in the San Francisco Bay Area. For more than a decade, she was the senior food writer at the San Jose Mercury News. As a freelance writer, her work has appeared in local, national, and international publications, including the San Francisco Chronicle, Silicon Valley Magazine, San Francisco Magazine, EatingWell, Edible: Marin & Wine Country, Via Magazine, Plate, Rachael Ray Every Day, Wine Spectator, Oakland Magazine, and Coastal Living. She regularly hosts chef demos in Yosemite as well as Macy’s department stores in the Bay Area. She is the creator of the blog FoodGal.com and the author of San Francisco Chef’s Table. She wholeheartedly believes that any day is made better with a great cookie or pastry.

The East Bay has always remained true to itself. It includes Oakland, the most ethnically diverse population in the nation; Berkeley, the birthplace of the Free Speech Movement; the island of Alameda with its artisan breweries, wineries, and distilleries; and the Livermore Valley, one of California's oldest winemaking regions.