Napa Bookmine and Mad Fritz are thrilled to join forces to bring fantastic books and their authors to the Mad Fritz Tap Room in St. Helena! 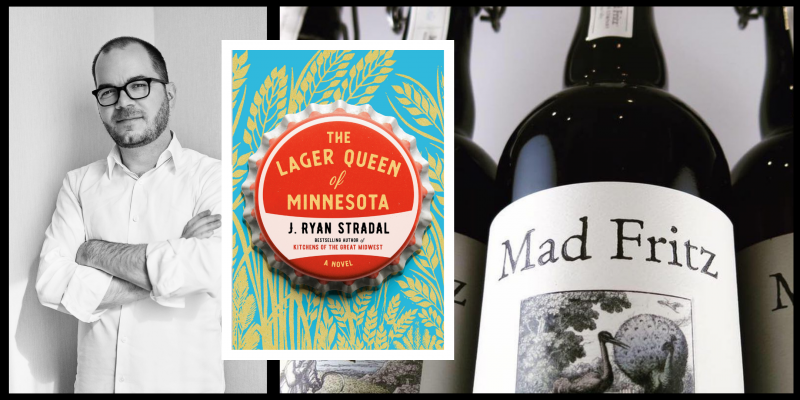 J. Ryan Stradal’s bestselling debut novel Kitchens of the Great Midwest was named a “Best Book of 2015” by NPR, was the Indie’s Choice winner for Adult Debut Book of the Year, and #1 Library Reads Pick upon publication. Stradal’s talents are again on full display in his second novel, where he turns his literary lens from foodie to beer culture with The Lager Queen of Minnesota, a sweeping story of two generations of female brewers who each reckon with a chance to repeat or resolve the mistakes that tore their family apart.

While Edith Magnusson was baking pies, her sister Helen was dreaming of brewing beer. When their father leaves Helen the entirety of their family farm, Helen makes her dream a reality at the expense of her sister, using their entire inheritance to build a top-selling brewery, a decision that ends their relationship. After a series of tragedies, Edith struggles to make ends meet while caring for her granddaughter, Diana. Ultimately, Diana lands a job sweeping floors and cleaning tanks at a local craft brewery. She falls in love with the art of making beer, and will eventually begin to build her own fledgling brewery, just as Helen’s empire begins to crumble.

With a cast of lovable yet complicated characters, The Lager Queen of Minnesota vibrantly captures the values and beauty of the Midwest in this multigenerational story of community, love, family secrets, and working class struggles. Brought together by hardship, Diana, Edith and Helen discover that they are the only people who can help save one another, in life and in the business of beer.

“Refreshing… This story about how a family business succeeds with generations of strong and determined women at the helm makes for a sometimes sad, sometimes funny, but always winning novel." —Publishers Weekly
“The Lager Queen of Minnesota is the kind of book you think about all day, while at work, while speaking to someone else, while in line at the market. . . . I loved this book so much. I carried it with me like a talisman, marveling at the unique storytelling of J. Ryan Stradal, who knows his people so well. It’s a portrait of America, of place and land and neighborhood, and, of course, a celebration of beer.” —Susan Straight, author of Highwire Moon

The Lager Queen of Minnesota: A Novel (Hardcover)

“The perfect pick-me-up on a hot summer day.”
—Washington Post