In her taboo-shattering New York Times bestseller Girls & Sex, Peggy Orenstein traversed the complicated new landscape of sex and sexuality that today’s young women must negotiate. “Deeply reported, passionately argued” (Slate), the book unsparingly pulled back the curtain on the reality of girls’ sex lives in the modern world. The Washington Post found it “provocative and thoughtful,”lauding the “impressive” breadth of Orenstein’s reporting. Yet, with the advent of the #MeToo era, Orenstein came to realize that her deep dive into contemporary culture provided only one side of the conversation. In a world where the sheer magnitude of sexual misconduct by men young and old has become glaringly and disturbingly obvious, Orenstein knew it was time that she look at the sexual attitudes, activities, and insecurities of a new generation of men with the same depth and candor as she had their female peers.

Boys & Sex: Young Men on Hookups, Love, Porn, Consent, and Navigating the New Masculinity draws on Peggy Orenstein’s trademark mix of richly reported anecdote and research to reveal how young men understand and negotiate the new rules of physical and emotional intimacy―and to map out a much-needed vision of how today’s boys can move forward as better men. “I already knew that Americans talk precious little to their daughters about sex, but I’d soon learn they talk even less to their sons,” writes Orenstein, who spent over two years talking to boys between the ages of sixteen and twenty-two, engaging in-depth, hours-long conversations about masculinity, as well as their attitudes, expectations, and early experiences with sex and intimacy. She came to realize that “boys may now more likely be admonished to ‘respect women,’ but what, precisely, does that mean: which women, under what circumstances, and how? What’s more, despite the growing insistence that only ‘yes’ means ‘yes,’ boys (like girls) are bombarded by incessant images—on TV, in movies, games, social media, music videos—of female objectification and sexual availability, which is reinforced by unprecedented exposure to pornography. How were they navigating that contradiction?” Orenstein also spoke with psychologists, academics, and other experts in the field as she investigated such topical realities as locker room talk; how the word “hilarious” robs boys of empathy; pornography as the new sex education; boys’ understanding of hookup culture and consent; and their experience as both victims and perpetrators of sexual violence. 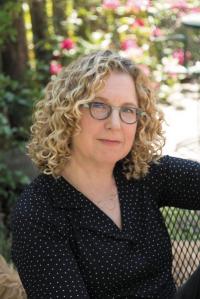 Peggy Orenstein is the New York Times bestselling author of Girls & Sex, Cinderella Ate My Daughter, Waiting for Daisy, Flux, and Schoolgirls. A contributing writer for the New York Times Magazine and AFAR Magazine, she has been published in The Washington Post, Slate, New York, The Atlantic, and The New Yorker, among other publications, and has contributed commentary to NPR's All Things Considered. She lives in Northern California with her husband and daughter.

This event is co-hosted by the Napa County Office of Education. The Napa County Office of Education is guided by a belief in vital partnerships and innovative approaches to learning. We provide academic services and enrichment opportunities for students, teachers and the community, as well as critical business services for school districts. NCOE is a leader in the dissemination of research-based best practices to educators locally and statewide.