Stamped from the Beginning: A Graphic History of Racist Ideas in America (Hardcover) 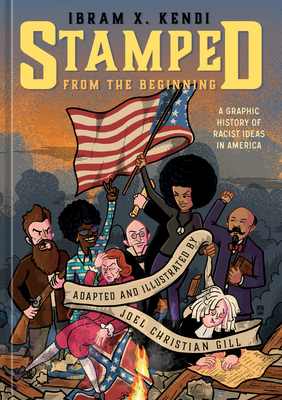 Stamped from the Beginning: A Graphic History of Racist Ideas in America (Hardcover)


Coming Soon - Available for Pre-Order Now
A striking graphic novel edition of the National Book Award-winning history of how racist ideas have shaped American life—from the #1 New York Times bestselling author of How to Be an Antiracist.

Racism has persisted throughout history—but so have antiracist efforts to dismantle it. Through deep research and a gripping narrative that illuminates the lives of five key American figures, preeminent historian Ibram X. Kendi reveals how understanding and improving the world cannot happen without identifying and facing the racist forces that shape it.

In collaboration with award-winning historian and comic artist Joel Christian Gill, this stunningly illustrated graphic-novel adaptation of Dr. Kendi’s groundbreaking Stamped from the Beginning explores, with vivid clarity and dimensionality, the living history of America, and how we can learn from the past to work toward a more equitable, antiracist future.
Dr. Ibram X. Kendi is the Andrew W. Mellon Professor in the Humanities at Boston University, and the founding director of the BU Center for Antiracist Research. He is a contributing writer at The Atlantic. Dr. Kendi is the author of Stamped from the Beginning: The Definitive History of Racist Ideas in America, which won the National Book Award for Nonfiction, making him the youngest winner of that award. He also produced five #1 New York Times bestsellers, including How to Be an Antiracist, Antiracist Baby, and Stamped: Racism, Antiracism, and You, co-authored by Jason Reynolds. In 2020, Time magazine named Dr. Kendi one of the 100 most influential people in the world. He was awarded a 2021 MacArthur Fellowship, popularly known as the Genius Grant.

Joel Christian Gill is the Chair of the MFA in Visual Narrative at Boston University. He is a cartoonist and historian who speaks nationally on the importance of sharing stories. He is the author of the acclaimed memoir Fights: One Boy's Triumph Over Violence, cited as one of the best graphic novels of 2020 by The New York Times and for which he was awarded the 2021 Cartoonist Studio Prize. He wrote the words and drew the pictures for Fast Enough: Bessie Stringfield’s First Ride and the award-winning graphic novel series Strange Fruit: Uncelebrated Narratives from Black History, and Tales of The Talented Tenth, which tell the stories of Bass Reeves, Bessie Stringfield, and Robert Smalls.
“Ibram X. Kendi and Joel Christian Gill understand the assignment. If certain politicians get their way and schools stop teaching anything that resembles the real history of America, then graphic novels will have to put down the capes and cowls and pick up the true stories of how America came to be America. This is an unvarnished, unapologetic, unflinching, and appropriately snarky tale of the mess we are in. And Kendi and Gill have thoughtfully put this information in the hands of the generation who, unfortunately, are going to have to figure it out.”—W. Kamau Bell, Emmy award–winning executive producer, New York Times bestselling author, and comedian

“This essential adaptation gives the visual learner something to hold onto while being flown through centuries of history and the ideas that helped shape them. The notion that IDEAS can shape history was so hard for me to grasp as a young person; a book that helps people see how racist ideas have shaped our past and present is vital for writing a new direction for humanity’s future.”—Thi Bui, author of The Best We Could Do: An Illustrated Memoir

“Joel Christian Gill’s graphic adaptation is uncompromising, masterfully enriching readers’ context and understanding within Dr. Ibram X. Kendi’s landmark work. An essential new approach to understanding centuries of systemic power dynamics throughout our society, from our shared history to possible futures.”—Nate Powell, award-winning cartoonist of the March trilogy and Save It for Later