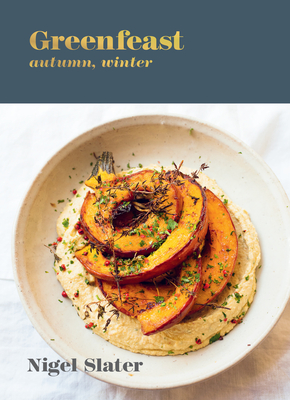 
Not On Our Shelves, Warehouse ships in 1-5 Days
110 vegetarian autumn and winter recipes that provide quick, easy, and filling plant-based suppers while paying homage to the seasons—from the beloved author of Tender.

Greenfeast: Autumn, Winter is a vibrant and joyous collection of recipes, perfect for people who want to eat less meat, but don’t want to compromise on flavor and ease of cooking. With Nigel Slater’s famous one-line recipe introductions, the recipes are blissfully simple and make full use of ingredients you have on hand.

Straightforward recipes showcase the delicious ingredients used such as Beetroot, Apple, and Goat's Curd; Crumpets, Cream Cheese & Spinach; and Naan, Mozzarella & Tomatoes and provide a plant-based guide for those who wish to eat with the seasons.
Nigel Slater is an award-winning author, journalist, and television presenter. He has been food columnist for The Observer Magazine for over twenty-five years. His collection of bestselling books includes the classics Appetite and The Kitchen Diaries and the critically acclaimed two-volume Tender. He has made cooking shows and documentaries for BBC1, BBC2, and BBC4. His memoir Toast: The Story of a Boy’s Hunger won six major awards and is now a film and stage production. His writing has won the James Beard Award, the National Book Award, the Glenfiddich Trophy, the André Simon Memorial Prize, and the British Biography of the Year. He lives in London.
“Exquisite, luxurious recipes.”—Epicurious