Reflections of a Vintner: Stories and Seasonal Wisdom from a Lifetime in Napa Valley (Hardcover) 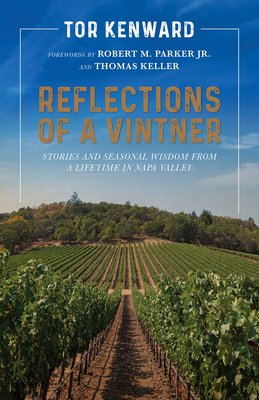 Reflections of a Vintner: Stories and Seasonal Wisdom from a Lifetime in Napa Valley (Hardcover)


On Our Shelves Now
A compendium for wine lovers: a prominent vintner shares a lifetime of great wines, famous friends, deep knowledge, and insider insights

Reflections of a Vintner recounts the lessons learned, relationships forged, and observations made from an insider’s nearly fifty-year journey through the burgeoning wine industry in Napa Valley. From the mid-seventies, when there were less than fifty wineries, to the present, with over eight hundred, Tor Kenward shares his recollections as the region became a world-class wine destination.

Following the calendar year, each chapter opens with the challenges and opportunities a winemaker faces that month—in the vineyard, winery, tasting room, and out on the road. In addition to the wine knowledge Kenward imparts, the vintner shares stories of his friendships with legends of the modern American food and wine scene, including Julia Child, André Tchelistcheff, Andy Beckstoffer, and Robert Mondavi, among others.

Kenward’s hard work as a vintner was recently acknowledged and celebrated. In the October 2021 Judgment of Napa, held forty-five years after the historic Judgement of Paris, TOR Cabernet was judged to be #1, outscoring legendary Bordeaux châteaux, Napa Valley, and international peers by leading critics and sommeliers. TOR wines, coveted by connoisseurs worldwide, received seven perfect 100-point ratings from leading critics for their 2018 Napa Valley wines.

An iconic winemaker, Kenward has written, taught, and lectured on wine most of his adult life. What he is most often asked about are not facts or numbers about his wines, but the stories behind them. These are stories of inspiration and wisdom that shaped his journey. With Kenward’s impressive connection to Napa Valley and his legacy of creating inimitable wines, Reflections of a Vintner offers entertaining insights into an often intimidating and complex but highly enjoyable world.

Tor Kenward began his career at Beringer in 1977, where he spent 25 years as an executive. Tor helped shape Beringer’s Private Reserve and Single Vineyard wine programs; was mentored by notable winemakers from Bordeaux, Burgundy, and California; and launched Beringer’s culinary initiatives. He cofounded the School for American Chefs with noted French chef Madeleine Kamman in the 1980s. Robert M. Parker Jr. is a wine critic and the creator of the Wine Advocate newsletter as well as the revolutionary 100-point wine rating system. He has won countless awards, including two of France’s highest presidential honors. He is the author of many books, including Burgundy and Bordeaux, and lives in Maryland with his family. Thomas Keller, the first and only American chef to hold multiple Michelin three-star ratings, is the most celebrated chef in the US. Beginning with his legendary French Laundry, Keller has opened restaurants across the country, including Per Se, Bouchon, Bouchon Bakery, Ad Hoc, the Surf Club Restaurant, and La Calenda. Keller is also a bestselling author, with more than 1.5 million copies of his cookbooks in print.