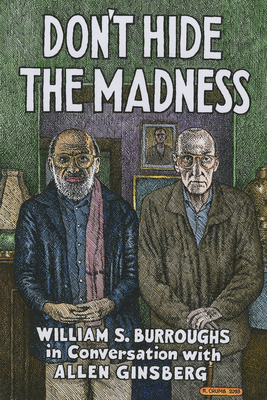 
Not On Our Shelves, Warehouse ships in 1-5 Days
Two seminal figures of the Beat movement, Allen Ginsberg and William S. Burroughs, discuss literary influences and personal history in a never-before-published three-day conversation following the release of the David Cronenberg film of Burroughs' classic novel Naked Lunch. The visit coincided with the shamanic exorcism of the demon that Burroughs believed had caused him to fatally shoot his common law wife, Joan Vollmer Burroughs, in 1951--the event that Burroughs believed had driven his work as a writer. The conversation is interspersed with photographs by Ginsberg revealing Burroughs's daily activities from his painting studio to the shooting range. DON'T HIDE THE MADNESS presents an important, hitherto unpublished primary document of the Beat Generation.
William S. Burroughs was a primary figure of the Beat Generation and a major postmodernist author whose influence is considered to have affected a range of popular culture as well as literature. Burroughs wrote eighteen novels and novellas, including Naked Lunch, Junky, and Queer. Naked Lunch was adapted for the screen in the 1991 award-winning film directed by David Cronenberg. American poet, philosopher, and photographer Allen Ginsberg is considered to be one of the leading figures of both the Beat Generation during the 1950s and the counterculture that soon followed. Among his many published poetry collections, he is best known for Howl and Other Poems, Kaddish and Other Poems, and Collected Poems, 1947-1997. Poet, musician, and ethnomusicologist Steven Taylor toured extensively with Allen Ginsberg from 1976 to 1996, collaborating on music and poetry works. Taylor is a member of the seminal underground rock band The Fugs, and is author of two books of poems and the musical ethnography, False Prophet: Field Notes from the Punk Underground. From 1990 to 2008 he was on the faculty at the Jack Kerouac School of Disembodied Poetics at Naropa University. Currently, he is senior editor at Reality Sandwich. He lives in Brooklyn, NY.