Blood Legacy: Reckoning with a Family's Story of Slavery (Hardcover) 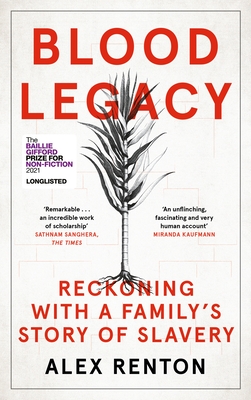 Blood Legacy: Reckoning with a Family's Story of Slavery (Hardcover)

Through the story of his own family's history as slave and plantation owners, Alex Renton looks at how we owe it to the present to understand the legacy of the past. When the transatlantic slave trade was abolished across most of the British Empire in 1833, it was not the newly liberated who received compensation, but the tens of thousands of enslavers who were paid millions of pounds in government money. The descendants of some of those slave owners are among the wealthiest and most powerful people in Britain today.

A group of Caribbean countries is calling on ten European nations to discuss the payment of trillions of dollars for the damage done by transatlantic slavery and its continuing legacy. Meanwhile, Black Lives Matter and other activist groups are causing increasing numbers of white people to reflect on how this history of abuse and exploitation has benefited them. Blood Legacy explores what inheritance - political, economic, moral and spiritual - has been passed to the descendants of the slave owners and the descendants of the enslaved. It travels through eighteenth-century Tobago and Trinidad, and nineteenth-century Jamaica, and Renton interviews people living in the Caribbean today. He also asks, crucially, how the descendants of those slave owners - himself among them - can begin to make reparations for the past.
Alex Renton is a journalist who has won awards for his work as an investigator, war correspondent and food policy writer. He has also worked for Oxfam, in East Asia, Haiti and on the Iraq war. Most recently he has been a columnist on the Times and Scotland correspondent for Newsweek magazine. He lives in Edinburgh with his family. @axrenton alexrenton.com