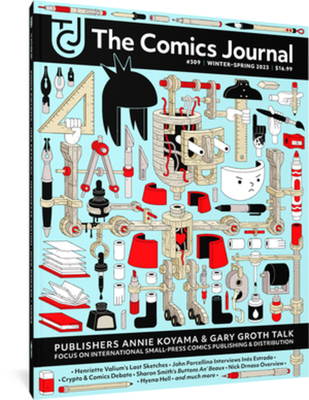 A civilized conversation between two North American advocates of comics as art and publishing as an avocation. An interview with Koyoma Press publisher Annie Koyoma by Fantagraphics publisher Gary Groth leads into The Comics Journal #309’s focus on international small press comics publishing and distribution. John Porcellino, the King Cat of zines and carefully observed autobio comics, speaks to Inés Estrada, cartoonist (Alienation) and publisher/distributor of comics and zines in Mexico. Also: a gallery of Henriette Valium’s work, from his drawing table at the time of his passing. Cartoonist (Beta Testing the Ongoing Apocalypse) and publisher (Uncivilized Press) Tom Kascynski debates comics critic Alin Rautoiu about crypto and comics. And: a biography/gallery of Sharon Smith and her classic comic strip, Button ‘n’ Beax; a brand-new comic from Betty Kim; a deep dive into Nick Drnaso’s oeuvre; a deconstruction of the Image comics aesthetic; a spotlight on Hyena Hell; the debut of two new columns focusing on new and classic manga, avant-garde European comics, and much, much more.

Gary Groth is the co-founder of The Comics Journal and Fantagraphics Books. He lives in Seattle.

Kristy Valenti is an Eisner-Award-winning editor at Fantagraphics Books. She lives in Seattle.

Austin English is an artist and writer living in Brooklyn. He has written for The Comics Journal regularly since he was 17. As a cartoonist, he has published the books Gulag Casual and Meskin and Umezo. His artwork has been exhibited in galleries throughout the United States, including Marvin Gardens in New York and Et Al gallery in San Francisco. He runs the comics publishing house Domino Books, which he founded in 2011. He also teaches comics, drawing and art history at both Parsons School of Design and The School of Visual Arts in New York City.

Annie Koyama was the publisher and founder of the Toronto-based Koyama Press, an independent graphic novels, art books, and zines company. With a background in commercial arts and after a terminal illness diagnosis, she started Koyama Press in 2007 with the mission to support comics and visual artists. She folded the publishing arm in 2021 and moved on to Koyama Provides, a micro-grant program for cartoonists / visual artists.  She is the recipient of the 2022 Bob Clampett Humanitarian Award.
The Comics Journal [is the] storied arbiter of the indie-comics world.