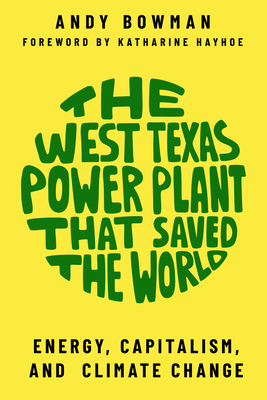 What if the harbinger of our greener future was a small power plant set in the middle of nowhere in West Texas? Longtime alternative energy executive Andy Bowman's book makes exactly this case, outlining what he suggests is a more sustainable future for American capitalism. The West Texas Power Plant that Saved the World takes the Barilla solar plant in Pecos County as a test case for the state of renewable energy in the twenty-first century United States.

For author Andy Bowman, this is a very personal story. Bowman grew up in Galveston and acutely remembers watching stormwater climb up seawalls and wreak havoc on his home. He weaves these memories into his coming of age over two decades in the alternative energy industry, beginning in the 1990s, and tracks it's the industry's fits and starts that lead to the Barilla project. Barilla was the first solar project to be built "on spec" essentially, the plant was built without a contract in place and with the assumption that customers would come. That trailblazing wager represents a tidal shift in the alternative energy industry.

In a clear voice, Bowman explains the climate science that necessitated this shift and makes business-based arguments for what the future should look like. The result is a book that tells a personal story of West Texan innovation, gumption, and vision, while also outlining how our society needs to equip itself to confront climate change.