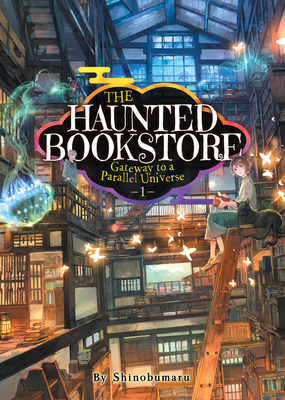 This is book number 1 in the The Haunted Bookstore - Gateway to a Parallel Universe series.

An atmospheric fantasy series for bibliophiles and fans of Japanese ghost stories! (And don’t miss the manga adaptation, also from Seven Seas.)

Kaori lives in an otherworldly bookstore with her adoptive father. Together, they provide books to the strange denizens of the spirit realm. But Kaori's peaceful days come to an end when she rescues an injured boy from the streets--a human, like her, from the mortal realm. The boy's name is Suimei, and he's an exorcist, the natural enemy of all spirits. Can Kaori convince Suimei that the line between human and spirit is far hazier than he thinks? A touching supernatural tale where humanity and Japanese folklore intertwine!
Shinobumaru is a Japanese writer best known for Isekai Omotenashi Gohan and The Haunted Bookstore - Gateway to a Parallel Universe.

Munashichi is a Japanese artist best know for the lushly detailed, captivating illustrations in series such as Deathbound Duke's Daughter and The Haunted Bookstore - Gateway to a Parallel Universe.