What's Your Pronoun?: Beyond He and She (Hardcover) 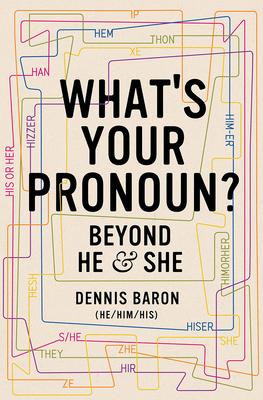 What's Your Pronoun?: Beyond He and She (Hardcover)

Addressing one of the most pressing cultural questions of our generation, Dennis Baron reveals the untold story of how we got from he and she to zie and hir and singular-they.

Like trigger warnings and gender-neutral bathrooms, pronouns are sparking a national debate, prompting new policies in schools, workplaces, even prisons, about what pronouns to use. Colleges ask students to declare their pronouns along with their majors; corporate conferences print name tags with space to add pronouns; email signatures sport pronouns along with names and titles. Far more than a by-product of the culture wars, gender-neutral pronouns are, however, nothing new. Pioneering linguist Dennis Baron puts them in historical context, noting that Shakespeare used singular-they; women invoked the generic use of he to assert the right to vote (while those opposed to women’s rights invoked the same word to assert that he did not include she); and people have been coining new gender pronouns, not just hir and zie, for centuries. Based on Baron’s own empirical research, What’s Your Pronoun? chronicles the story of the role pronouns have played—and continue to play—in establishing both our rights and our identities. It is an essential work in understanding how twenty-first-century culture has evolved.

Dennis Baron professor emeritus of English and linguistics at the University of Illinois, has long been a national commentator on language issues, from the Washington Post to NPR and CNN. A recent Guggenheim Fellow, he lives in Champaign, Illinois.
A scrupulous and absorbing survey. Its great virtue is to show that these issues are nothing new… This scholarly assiduousness, though, also makes him the ideal pilot through these contentious political-linguistic waters. If you want to know why more people are asking ‘what’s your pronoun?’ then you (singular or plural) should read this book.
— Joe Moran - New York Times Book Review

Into the breach comes a useful corrective in the form of Dennis Baron’s well-timed new book.
— The Economist

Based on decades of research, Baron’s masterly work documents the historical and continued importance of personal pronouns. Those interested in gender politics or English grammar, or who feel that 'he' and 'she' are inadequate, would benefit greatly from perusing this book.
— Ahliah Bratzler, Library Journal [starred review]

A thorough history of pronoun debates.... Guggenheim fellow Baron examines what seems like a contemporary question with a historical lens. In this primer, he reveals a centuries-long search for a singular gender-neutral pronoun in English, dispelling persistent myths that such a quest is a recent effort or the product of politically correct motivations.... The author's playful tone imbues the text with friendly sensitivity, and readers will appreciate his decades of research and meticulous attention to documents and sources. The result is a book that reflects the transformational capacity of language. A lively book for language lovers, those confused about uses of they/them, and anyone curious about writing while gendered.
— Kirkus Reviews

A deep dive all the way back to the first English grammars of the seventeenth century.... [Baron] concludes with a flourish: an überambitious, 58-page chronology of gender-neutral and nonbinary pronouns. Esoteric? Yes, but catnip for the grammarian, especially the culturally and politically conscious variety.
— Michael Cart, Booklist

An entertaining and thoroughly documented account of two centuries’ worth of attempts to solve the problem of the English language’s “missing word”.... [Baron] digs deeply into the legal and cultural implications of pronoun usage.... [His] ‘annotated historical lexicon’ of more than 250 gender-neutral pronouns [is] a gold mine for readers who delight in the strangeness of language, as well as a clear demonstration of the thorniness of the issue. This easygoing, comprehensive guide will appeal to progressive word geeks.
— Publishers Weekly

Pronouns seem a bit of a mess of late in American English, and Dennis Baron shows us the plain sense in what may seem chaotic. The final chapter, which lists the attempts over the centuries to come up with a new gender-neutral pronoun—anyone for hesh?—is worth the price of the ticket.
— John McWhorter, Columbia University, and host of Slate's language podcast Lexicon Valley

If you’re interested in the current ruckus over pronouns, this is the book.

Dennis Baron has spent years researching the quest for a gender-neutral third-person singular pronoun in English. Lively, accessible, and full of fascinating details, What’s Your Pronoun? will appeal to anyone with an interest in linguistic and cultural history.

Controversies over gender-neutral pronouns, in which language becomes the surrogate for addressing deep social questions, have been going on for centuries. What’s Your Pronoun? is the most authoritative treatment to date of these issues, and should be required reading for anyone interested in the linguistic expression of gender.

A gem of a book. Captivating and filled with insight, What’s Your Pronoun? entertains, enlightens, and pulls us joyfully into rethinking our ideas about what’s new and old in language.