The Strength of the Wolf: The Secret History of America's War on Drugs (Paperback) 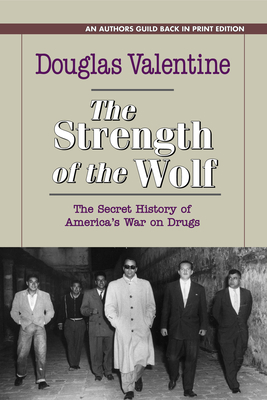 The Strength of the Wolf: The Secret History of America's War on Drugs (Paperback)


Not On Our Shelves, Warehouse ships in 1-5 Days
The Strength of the Wolf is the first complete history of the Federal Bureau of Narcotics (1930–1968). Working undercover around the globe, the FBN's charismatic “case-making” agents penetrated the Mafia and its French connection. In the process, however, they uncovered the national security establishment’s ties to organized crime. Victims of their freewheeling methods and unparalleled success in hunting down society’s predators, the agents were ultimately targeted for destruction by the FBI and CIA. Based largely on interviews with case-making agents, The Strength of the Wolf provides a new, exciting, and revealing chapter in American history.
Douglas Valentine is the author of five non-fiction books: The Hotel Tacloban (1984), The Phoenix Program (1990), The Strength of the Wolf (2004), The Strength of the Pack (2009), and the CIA as Organized Crime (2017). He is the author of the novella TDY (2000) and a book of poems, A Crow's Dream (2011). He also created and edited the poetry anthology With Our Eyes Wide Open: Poems of the New American Century (2012). Valentine has testified as an expert witness, served as a documentary film consultant, and worked as a private investigator.