The Brompton: Engineering for Change (Hardcover) 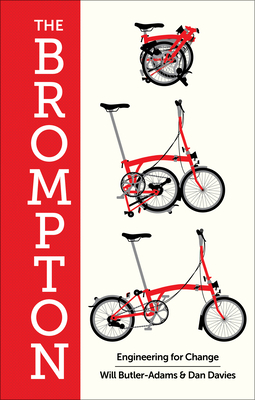 The Brompton: Engineering for Change (Hardcover)


Coming Soon - Available for Pre-Order Now
The story of how Brompton, the iconic folding bicycle that you can take anywhere—and that can take you anywhere—grew from a small cult bike company to a multimillion-dollar business

Lightweight, compact, distinctively styled, and now, electric: The Brompton isn't the only folding bicycle—or even the first. But everyone who has been on one will enthusiastically testify to its marvelous design (virtually unchanged over decades) and the particular joy of riding it.

Will Butler-Adams, CEO of Brompton Bicycles, has been at the company for twenty years. Initially, he worked as an engineer for Andrew Ritchie, the bike's brilliant inventor and the business's founder, before taking the helm in 2008. Butler-Adams's heartfelt mission is to grow and promote sustainable urban transportation and to improve city-dwellers' lives everywhere.

Under his leadership, Brompton has grown from making a few hundred bikes a year to over 90,000, with revenue of $130 million. But progress hasn't always been easy: There have been boardroom struggles, supply-chain problems, and conflicts with founder Andrew Ritchie. In The Brompton, Butler-Adams brings to life what it means to grow a company to global scale. He also tells the stories of the people who make the Brompton and the people who ride it. And he explains how customers all around the world fell in love with a brand that never set out to be a brand.

Will Butler-Adams is a chartered engineer and CEO of Brompton Bicycle Limited. He was appointed Order of the British Empire (OBE) in 2015 and has been featured in multiple publications, including the Financial Times. He has also delivered talks for Google and PricewaterhouseCoopers. He lives with his family in London.
Dan Davies is a former regulatory economist at the Bank of England and analyst for a number of investment banks. The author of Lying for Money, he has written for the Financial Times and The New Yorker, among other publications.
“The Brompton is a wonderful account . . . every line and word snapping into place.”—The Wall Street Journal

“Full of energy and passion, and a great insight into the real story behind Brompton phenomenon. A great exemplar of how human and engineering stories can be one and the same.”—Dr. Hayaatun Sillem, CEO of the Royal Academy of Engineering

“A gripping story about one of the great British brands. As perfect as the bicycles.”—Jeremy Vine, broadcaster and journalist for BBC Radio 2

“Since I left racing, Will Butler-Adams has helped me rediscover the joy of cycling. My Brompton has become my favourite bicycle, and Brompton the company is the inspiration for what my own company, CHPT3, can become.”—David Millar, former professional cyclist and CEO of CHPT3