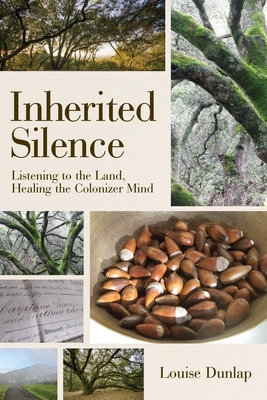 Inherited Silence tells the story of beloved land in California's Napa Valley--how the land fared during the onslaught of colonization and how it fares now in the drought, development, and wildfires that are the consequences of the colonial mind. Author Louise Dunlap's ancestors were among the first Europeans to claim ownership of traditional lands of the Wappo people during a period of genocide. As settlers, her ancestors lived the dream of Manifest Destiny, their consciousness changing only gradually over the generations. When Dunlap's generation inherited the land, she had already begun to wonder about its unspoken story. What had kept her ancestors from seeing and telling the truth of their history? What had they brought west with them from the very earliest colonial experience in New England? Dunlap looks back into California's and America's history for the key to their silences and a way to heal the wounds of the land, its original people, and the harmful mind of the colonizer. It's a powerful story that will awaken others to consider their own ancestors' role in colonization and encourage them to begin reparations for the harmful actions of those who came before. More broadly, it offers a way for every reader to evaluate their own current life actions and the lasting impact they can have on society and our planet.
Louise Dunlap is a sixth-generation Californian. She has taught writing to undergraduates and grad students in urban and environmental planning, worked with writers in advocacy groups, wrote Undoing the Silence, and began journeys into the hidden history of white supremacy that led to this book. She honors the spiritual teachings of many traditions and, in 2004, was ordained by Vietnamese Zen Master Thich Nhat Hanh into the Order of Interbeing, with the name True Silent Teaching.