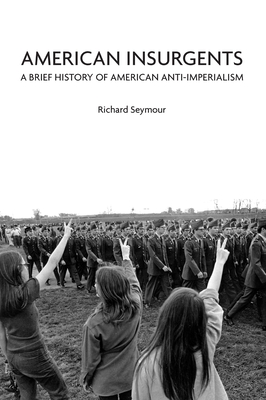 
Not On Our Shelves, Warehouse ships in 1-5 Days
All empires spin self-serving myths, and in the US the most potent of these is that America is a force for democracy around the world. Yet there is a tradition of American anti-imperialism that exposes this misleading mythology. American Insurgents is a surprising, revelatory history of anti-imperialism in the United States since the American Revolution. It charts the movements against empire from the Indian Wars and the expansionism of the slave South to the Anti-Imperialist League of Mark Twain and Jane Addams. Seymour crafts a lively and transparent explanation of why some of these movements succeeded and others failed. The result is a vital perspective for those organizing antiwar resistance today.
Richard Seymour is a socialist writer and columnist and runs the blog Lenin's Tomb. He is the author of The Liberal Defense of Murder (Verso, 2008), and The Meaning of David Cameron (Zero Books, 2010). He has contributed to Christopher Hitchens and His Critics: Terror, Iraq and the Left , (NYU Press, 2008) and The Ashgate Research Companion to Political Violence (Ashgate, forthcoming). His articles have appeared in The Guardian, The New Statesman, Radical Philosophy and Historical Materialism. Originally from Northern Ireland, he now resides in London, where he is studying for a PhD at the London School of Economics.

American Insurgents presents an indispensable history of anti-imperialist movements in the United States. . . . Seymour shatters a whole host of standard misconceptions about resistance to overseas adventures, refuting the common portrait of a US public apathetic to the crimes of its government in foreign lands. . . . The book is illuminated by the courageous and inspiring voices of US anti-imperialists, from Frederick Douglass to Muhammad Ali to current opponents of recent US wars in the Middle East.”
Michael Schwartz, author, War Without End

In these times of international rebellion, [Richard Seymour] has given us a tool with which to build a movement for a more just world, both within and beyond our borders.”
Camilo Mejía, author, Road to ar-Ramadi

In the tradition of Howard Zinn's A People’s History of the United States and Joe Allen’s Vietnam, Richard Seymour shows that US imperialism has generated significant domestic opposition rooted in grassroots movements for racial, economic, and social justice.”
Michael Letwin, founding member, New York City Labor Against the War and Labor for Palestine

Praise for Liberal Defense of Murder

Richard Seymour’s obsessively researched, impressive first book holds its place as the most authoritative historical analysis of its kind”
Resurgence

[T]ruly impressive breadth and depth ... [providing] ... a new European perspective and a warning on the left’s pragmatic and ultimately shortsighted support for imperialist adventures”
Journal of American Studies

Among those who share responsibility for the carnage and chaos in the Gulf are the useful idiots who gave the war intellectual cover and attempted to lend it a liberal imprimatur. The more belligerent they sounded the more bankrupt they became; the more strident their voice the more craven their position Richard Seymour expertly traces their descent from humanitarian intervention to blatant Islamophobia.”
Gary Younge