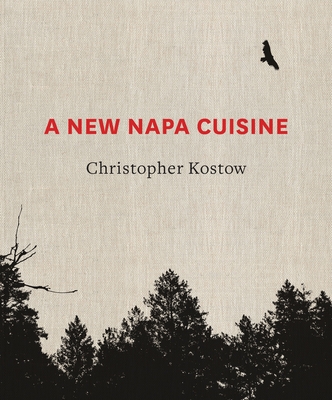 
Send us an inquiry for availability information on this title!
Follow Christopher Kostow’s journey from a young line cook in a seaside town to the storied Restaurant at Meadowood, the Napa Valley mainstay that has earned three Michelin stars and James Beard Awards for best chef and outstanding service under Kostow’s leadership.

Through 100 artfully constructed recipes and stunning photography, Kostow details the transformative effect this small American valley has had on his life and work—introducing us to the artisans, products, growers, and wild ingredients that inspire his unparalleled food. As he shares stories of discovering wild plums and radishes growing along the creek behind his home or of firing pottery with local ceramists, Kostow presents a new Napa cuisine—one deeply rooted in a place that’s rich in beauty, history, and community.
Christopher Kostow is the critically acclaimed chef at The Restaurant at Meadowood in St. Helena, California, and one of the youngest chefs ever to receive three Michelin stars. A Chicago native, Kostow has cooked in such celebrated kitchens as George’s at the Cove in San Diego, Campton Place in San Francisco, Le Jardin des Sens in Montpellier, France, and Chez TJ in Mountain View, California, where he earned two Michelin stars. He was named one of Food & Wine magazine’s Best New Chefs in 2009 and won the James Beard Award for Best Chef: West in 2013; The Restaurant at Meadowood won the James Beard Award for Outstanding Service in 2014. Christopher lives in St. Helena with his wife, Martina, and their daughter, Daisy.
“Without question, Christopher is one of the greatest chefs of our generation. He is immensely talented and I’m fortunate to call him a friend. Working together years back gave me a glimpse of his potential and to see how he’s developed in such a short time is amazing. Christopher is thoughtful, deliberate, and respectful in the kitchen, honoring every ingredient he uses; but he also ensures that each and every bite of food is delicious. That’s what I love about him; that’s what makes this book so important. The Restaurant at Meadowood is a special place, one of the best restaurants in the world, and this book will forever serve as a beautiful tool and reference for anyone who enjoys food.”
—Daniel Humm, chef and author of I Love New York

“This book is a masterpiece. Christopher Kostow is a great chef and an artist, and also a responsible guard of our terroir. How fortunate we are that he chose Napa Valley in which to create his own style of cooking. Bravo, chef!”
—Margrit Mondavi