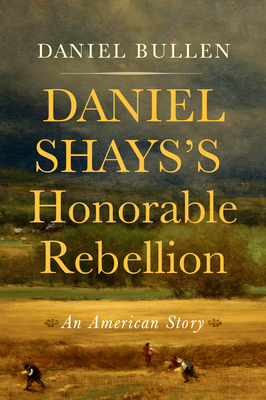 
Not On Our Shelves, Warehouse ships in 1-5 Days
On January 25, 1787, in Springfield, Massachusetts, militia Major General William Shepard ordered his cannon to fire grapeshot at a peaceful demonstration of 1,200 farmers approaching the federal arsenal. The shots killed four and wounded twenty, marking the climax of five months of civil disobedience in Massachusetts, where farmers challenged the state’s authority to seize their farms for flagrantly unjust taxes. Government leaders and influential merchants painted these protests as a violent attempt to overthrow the state, in hopes of garnering support for strengthening the federal government in a Constitutional Convention. As a result, the protests have been hidden for more than two hundred years under the misleading title, “Shays’s Rebellion, the armed uprising that led to the Constitution.” But this widely accepted narrative is just a legend: the “rebellion” was almost entirely nonviolent, and retired Revolutionary War hero Daniel Shays was only one of many leaders.
Daniel Shays’s Honorable Rebellion: An American Story by Daniel Bullen tells the history of the crisis from the protesters’ perspective. Through five months of nonviolent protests, the farmers kept courts throughout Massachusetts from hearing foreclosures, facing down threats from the government, which escalated to the point that Governor James Bowdoin ultimately sent an army to arrest them. Even so, the people won reforms in an electoral landslide.
Thomas Jefferson called these protests an honorable rebellion, and hoped that Americans would never let twenty years pass without such a campaign, to rein in powerful interests. This riveting and meticulously researched narrative shows that Shays and his fellow protesters were hardly a dangerous rabble, but rather a proud people who banded together peaceably, risking their lives for justice in a quintessentially American story.
DANIEL BULLEN earned a PhD in American literature from New York University. He is the author of The Dangers of Passion: The Transcendental Friendship of Ralph Waldo Emerson and Margaret Fuller and The Love Lives of the Artists: Five Stories of Creative Intimacy. He lives in western Massachusetts.
“Bullen has crafted an accurate, comprehensive, and carefully researched account of the individuals, their situation, and their actions. . . . He has captured the essence of an important social movement. The rebellion of the Massachusetts farmers against oppressive authority in 1786 has echoes in populist movements in America throughout history and even today. This story is only tangentially military history, but readers can learn much about a pivotal event in national development.”—Journal of America’s Military Past

“Daniel Shays’s famous contemporaries accused him and his fellow ‘rebels’ of seeking to skate out of their debts or even redistribute the property of the rich. But in this gripping and scrupulously accurate narrative, Daniel Bullen, starting from the plain fact that the Regulators (as they called themselves) did not take a single life, makes a persuasive case that they actually showed remarkable patriotism, economic acumen, and even restraint.”—Woody Holton, author of Liberty Is Sweet: The Hidden History of the American Revolution

“Shays Rebellion, caricatured and trivialized, is known primarily for the reaction it triggered, a precipitating cause of the Constitutional Convention. But Daniel Bullen takes the insurgents seriously: who were these fellows, and what was the cause of their complaints? By exploring them individually and collectively, Bullen discovers a coherent social movement, rooted in a historical tradition. Twelve years earlier, even before Lexington and Concord, they had managed to overthrow British rule throughout Massachusetts; in 1786, carefully and strategically, they tried to replicate that playbook, but with a very different result. Bullen’s vivid prose makes history come alive. We feel the farmers’ pain. We understand why they protested inequities, much as people do today.”—Ray Raphael, author of A People’s History of the American Revolution

“Many accounts of Shays’s protests describe a “rebellion” of armed men hell-bent on causing mayhem. Bullen’s emphasis on the nonviolent intent and nature of the protests is a refreshing approach. Equally refreshing is the modern-day relevance, which shows similarities between 1780s Massachusetts and modern America. Bullen has a knack for bringing things to life, and putting the reader in the thick of the story. He is very good at explaining complex issues (especially of a financial nature). This book will certainly remove Shays’s protests from the shadows of American history.”
— Keith Krawczynski, Distinguished Research and Teaching Professor, Honors Professor of History, Auburn University at Montgomery

“With deft insight, meticulous research, and beautifully rendered language, Daniel Bullen tells the story of Revolutionary War veteran Daniel Shays and his compatriots and the ill-fated rebellion that helped shape the course of American history. Bullen’s knowledge of place, his complex understanding of societal forces, and his nuanced view of character and story give authenticity to this riveting and little-known historical movement, when ordinary citizens banded together to help right an injustice. This is an important story for our time.”—Rilla Askew, PEN/Faulkner-nominated author of Fire in Beulah