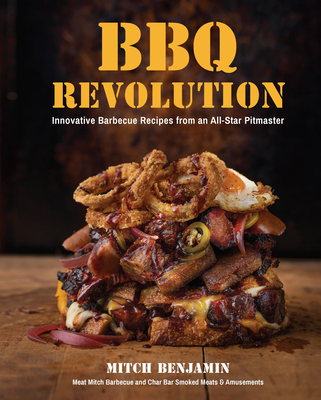 
Not On Our Shelves, Warehouse ships in 1-5 Days
From classic, competition-winning recipes to boundary-pushing ’que, join the founder of Meat Mitch competition BBQ team and Char Bar Smoked Meat and Amusements for a BBQ Revolution!

Mitch Benjamin has helped open BBQ restaurants in Paris, served his smoked meat to baseball legends at Yankee Stadium, and taken home some serious hardware from just about every major BBQ competition. In this book, he throws open the doors to his kitchen (or as he calls it, his “Mitchen”) and takes BBQ on a wild ride! The book starts with his behind the scenes look at competition BBQ and smoking, then winds its way through chapters both classic and creative: Whether you’re relatively new to BBQ or a seasoned pitmaster, you’re sure to find new ideas, techniques, and flavors if you hang around with Mitch. What are you waiting for? Join the revolution!

Mitch Benjamin, founder of the Meat Mitch competition BBQ team and brand, is the inventor of sauces and rubs that are consistently among the most award-winning and decorated in the country. The Meat Mitch competition team has won the prestigious American Royal BBQ Sauce World Championship Competition, The Memphis in May World Championship BBQ Sauce Competition, and finished with a 1st, 2nd, and 3rd in the heralded National Barbecue and Grilling Competition. Meat Mitch products can be found in stores and national chains throughout the US and in more than a dozen countries around the world.

In Kansas City, Mitch was named the “Barbecue Ambassador” to the city by none other than Legendary Hall-of-Fame baseball player, George Brett. Mitch has cooked for a variety of Major League Baseball festivities—even taking the field with a plate of ribs for the Home Run Derby Competition. In 2015, Mitch opened his first restaurant, Char Bar Smoked Meats and Amusements, in Kansas City. In a competitive BBQ environment, the restaurant won Best New Restaurant for 2015 in Kansas City—all restaurants included, not just barbecue. Mitch has also cooked for the New York Yankees, appeared on various national media, including Fox & Friends and The Today Show, and consulted on Rosie's Smokehouse, a pioneering BBQ restaurant in Paris, France.

“You are going to want to eat your way through this entire book. Mitch has a way of making BBQ not only tasty but so fun. I have always loved his ability to respect the classics and also put great twists on foods you may not first think to smoke. As you are eating his delicious treats, you might think, I wish I thought of that…. In this book, Mitch shares all the tricks so your friends will think you did think of that as you turn your backyard into a BBQ revolution!”
—Chef Michael Symon

“Mitch embraces old school ideals but brings innovation and a colorful perspective to an often monotone BBQ world. His fresh recipe ideas will inspire you to fire it up! Welcome to a BBQ revolution.”
—Chris Lilly, world-champion pitmaster and executive chef of Alabama's Big Bob Gibson Bar-B-Q

“Mitch puts his heart and soul into his BBQ and this book is no different! A perfect guide for everyone from the weekend, backyard, home cook to the competition cook looking to get on the stage.”—Billy Durney, owner of Hometown Bar-B-Que and Red Hook Tavern; James Beard Foundation Nominee for Be

“Mitch made the best ribs I have ever had, and his burnt ends might be the best thing I have ever eaten. His food is a must-have when I am in Kansas City, and now with BBQ Revolution, I can make it in my own backyard!”
—John Kruk, three-time Major League Baseball All-Star