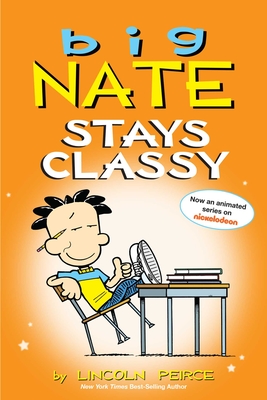 Now an animated series with Paramount+ and Nickelodeon!
A special Big Nate volume including all of the comics from Big Nate: From the Top and Big Nate Out Loud.

Big Nate is in a class by himself. Middle-grade kids everywhere can relate to Nate as he survives the terrors of sixth grade, facing off against overzealous teachers, under-cooked cafeteria food, and grade-grubbing classmates. Nate may be a troublemaker and the all-time record holder for most detentions in school history, but he gets there in style—taking on everything from glory on the sports field to becoming the lead singer in his friends’ band, with hilariously unexpected results along the way.

Grab your backpack and join Big Nate in this extra-amusing collection, as he blazes through the halls of P.S. 38, leaving a trail of destruction, detention slips, and many, many laughs in his wake.
Lincoln Peirce has been drawing the Big Nate comic strip for more than 20 years. Born in Ames, Iowa, Peirce grew up in Durham, New Hampshire. As a kid, he began creating his own strips in the sixth grade. Peirce taught high school in New York City and has created several animated pilots for Cartoon Network and Nickelodeon. He lives in Portland, Maine, with his family.