We Are Called to Be a Movement (Paperback) 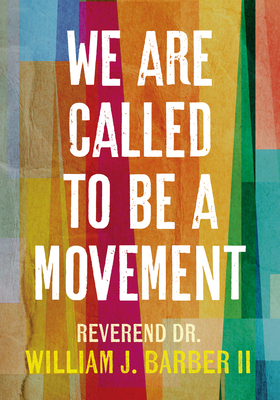 We Are Called to Be a Movement (Paperback)


Not On Our Shelves, Warehouse ships in 1-5 Days
It's time for everyone who cares about the state of our nation to heed the call and join forces to redeem the soul of America.

It's time to come together and renounce the politics of rejection, division, and greed. It's time to lift up the common good, move up to higher ground, and revive the heart of democracy.

In a single, rousing sermon, the celebrated Reverend William J. Barber II of the Poor People’s Campaign makes an impassioned argument whose message could not be clearer: It's time for change, and the time needs you.
The Rev. Dr. William J. Barber II is the President & Sr. Lecturer of Repairers of the Breach, Co-Chair of the Poor People’s Campaign: Bishop with the College of Affirming Bishops and Faith Leaders; Pastor of Greenleaf Christian Church in Goldsboro, North Carolina, and the author of three books. Rev. Dr. Barber is also the architect of the Forward Together Moral Movement, and on February 11, 2017, he led the largest moral march in North Carolina history, with over 80,000 people calling on their elected officials to embrace a moral public policy agenda.  A highly sought after speaker, Rev. Dr. Barber has given keynote addresses at hundreds of national and state conferences, including the 2016 Democratic National Convention. Rev. Dr. Barber currently sits on the National NAACP Board of Directors. A former Mel King Fellow at MIT, he is Visiting Professor of Public Theology and Activism at Union Theological Seminary and is a Senior Fellow at Auburn Seminary. He is the 2015 recipient of the Puffin Award and the Franklin D. Roosevelt Four Freedoms Award.

“Christians looking for inspiration toward collective action will love this.” — Publishers Weekly

"We Are Called To Be A Movement, a rousing reminder of the power in every one of us to make change." — Clay Aiken, singer and New York Times Bestselling Author

“William Barber is the closest person we have to Martin Luther King, Jr. in our midst." — Cornel West, author of Black Prophetic Fire

“Barber is one of the most gifted organizers and orators in the country today.” — The Nation

"The Reverend Dr. William Barber...has become, in the past few years, an indispensable figure in the civil-rights landscape, and, perhaps, the individual most capable of crafting a broad-based political counterpoint to the divisiveness of Trumpism." — Jelani Cobb, The New Yorker

"This short book is an authoritative reminder of the power of those who have been hurt the most to create a better world." —  Spirituality Practice