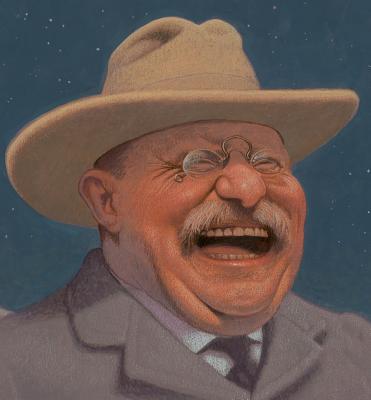 This is book number 7 in the A Big Words Book series.

A thrilling portrait of an unforgettable president by the critically acclaimed author of Abe's Honest Words and Martin's Big Words.

President Theodore Roosevelt is known as "the man with a plan," the "rough rider." His figure stands tall in American history; his legacy stretching him to larger-than-life proportions.

But before his rise to fame, he was just "Teedie," a boy with ambitious dreams to change the world, and the conviction to see his stupendous imaginings brought to fruition.

As an American president, he left an impressive mark upon his country. He promised a "square deal" to all citizens, he tamed big businesses, and protected the nation's wildlife and natural beauty. His fearless leadership assured that he would always be remembered, and his robust spirit now dares others to do mighty things.

In her moving picture book portrait, award-winning author Doreen Rappaport uses her well-honed approach of personal quotes and vivid prose to spin together the tale of a sickly boy who became a monumental man. Coupled with C. F. Payne's dramatic artwork, the story of President Teddy, touchstone of American history, is brought to life.
Doreen Rappaport has written numerous award-winning books for children, including Freedom Ship and The School Is Not White (both illustrated by Curtis James); Martin's Big Words: The Life of Dr. Martin Luther King, Jr., a Caldecott Honor Book and Coretta Scott King Honor Book illustrated by Bryan Collier; and John's Secret Dreams: The Life of John Lennon, also illustrated by Bryan Collier.
PRAISE FOR TO DARE MIGHTY THINGS

PRAISE FOR JACK'S PATH OF COURAGE