Bechamp or Pasteur?: A Lost Chapter in the History of Biology (Paperback) 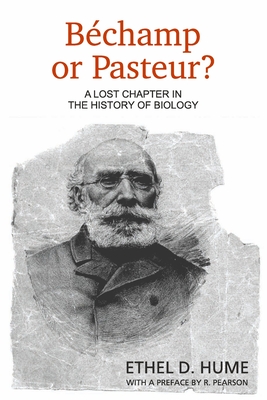 Bechamp or Pasteur?: A Lost Chapter in the History of Biology (Paperback)

R. Pearson's Pasteur, Plagiarist, Imposter, originally published in 1942, serves as the introduction. It details some of the reasons for the rancorous relationship between Louis Pasteur and Antoine B champ. Pearson points out many of the problems in Pasteur's work, and provides details, statistics and evidence to support his case. Some of the frauds which were eventually admitted by the Pasteur Institute are mentioned here.

Ethel Hume's B champ or Pasteur?, originally published in 1923, is the larger work, and provides the main body of evidence, in three parts:
1. The Mystery of Fermentation
2. The Microzymas
3. The Cult of the Microbe

This book is a compelling and thorough account of Pasteur's plagiarism and scientific fraud. It contains the evidence of the false grounds on which the germ theory of disease was elevated to its current status as a dogma, and beyond question. In this forgotten chapter of the history of biology and medicine, we are shown how powerful interests and agendas have prevailed over genuine science. Here are strong reminders of the powers which control the pharmaceutical and regulatory industries to this day.

Hume details the contention between B champ and Pasteur, and presents ample references to the original source material and supporting evidence. No claim is left undocumented or unsupported. Both authors are clearly not fans of Pasteur or his corruption of the principles of science, and they declare their intentions openly. They seek to undo a massive medical and scientific fraud. This new edition of their work is presented with the same intent.

The real facts, which have been suppressed for so long, should be revealed to the world. Modern science needs to return to this bifurcation point, and take the pleomorphic path. When this phenomenon is truly understood, many aspects of modern medical thought will disappear, as do all things which outlive their usefulness. In B champ's work, we can see on display the foundations of the quantum biology and epigenetics which inform the work of such modern researchers as Joe Dispenza, Gregg Braden, and Bruce Lipton.

This is a foundational text of the new biology, and should be required reading for anyone seeking to understand how the body actually functions and heals. This book should be read by every doctor, health professional, nutritionist, and biologist.

"It's strange to realize that the two parts in this book actually were printed way back, respectively in 1923 and 1942, so why has the truth about Pasteur and the vaccination been buried for so long?"

BOOK ONE
Pasteur: Plagiarist, Imposter
by R. B. Pearson

BOOK TWO
B champ or Pasteur?
A Lost Chapter in the History of Biology
by Ethel Douglas Hume

Part 1: The Mystery of Fermentation
Part 2: The Microzymas
Part 3: The Cult of the Microbe