Invisible People: Stories of Lives at the Margins (Paperback) 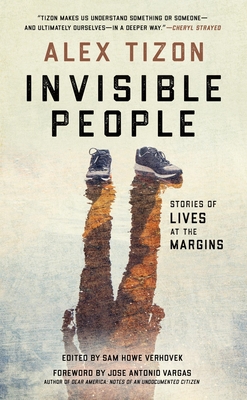 Invisible People: Stories of Lives at the Margins (Paperback)

Every human being has an epic story. The late Pulitzer Prize–winning writer Alex Tizon told the epic stories of marginalized people—from lonely immigrants struggling to forge a new American identity to a high school custodian who penned a New Yorker short story. Edited by Tizon’s friend and former colleague Sam Howe Verhovek, Invisible People collects the best of Tizon’s rich, empathetic accounts—including “My Family’s Slave,” the Atlantic magazine cover story about the woman who raised him and his siblings under conditions that amounted to indentured servitude.

Mining his Filipino American background, Tizon tells the stories of immigrants from Cambodia and Laos. He gives a fascinating account of the Beltway sniper and insightful profiles of Surfers for Jesus and a man who tracks UFOs. His articles—many originally published in the Seattle Times and the Los Angeles Times—are brimming with enlightening details about people who existed outside the mainstream’s field of vision.

In their introductions to Tizon’s pieces, New York Times executive editor Dean Baquet, Atlantic magazine editor in chief Jeffrey Goldberg, Pulitzer Prize winners Kim Murphy and Jacqui Banaszynski, and others salute Tizon’s respect for his subjects and the beauty and brilliance of his writing. Invisible People is a loving tribute to a journalist whose search for his own identity prompted him to chronicle the lives of others.

Alex Tizon (1959 – 2017) was a  Pulitzer Prize–winning journalist. He wrote numerous articles for publications including The Seattle Times, The Los Angeles Times, and The Atlantic. He was also the author of a memoir: Big Little Man: In Search of My Asian Self.
Sam Howe Verhovek is freelance writer and former reporter for The New York Times and TheLos Angeles Times. He is the author of Jet Age: The Comet, the 707, and the Race to Shrink the World. He is also an adjunct faculty member at Seattle University and the University of Washington.

“Alex Tizon is the master of the telling detail that penetrates the surface and makes us understand something or someone—and ultimately ourselves—in a deeper way. Tizon’s beautiful book is as powerful as they come.”—Cheryl Strayed

"[B]oth longtime fans and those relatively new to Tizon’s work will come away from this collection with an appreciation for his unquestionable ability to narrate unusual stories in memorable ways."--Publishers Weekly