The Long Haul (Diary of a Wimpy Kid #9) (Hardcover) 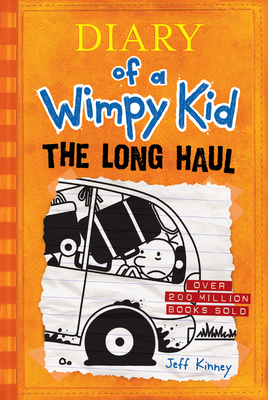 The Long Haul (Diary of a Wimpy Kid #9) (Hardcover)

This is book number 9 in the Diary of a Wimpy Kid series.

A family road trip is supposed to be a lot of fun . . . unless, of course, you’re the Heffleys. The journey starts off full of promise, then quickly takes several wrong turns. Gas station bathrooms, crazed seagulls, a fender bender, and a runaway pig—not exactly Greg Heffley’s idea of a good time. But even the worst road trip can turn into an adventure—and this is one the Heffleys won’t soon forget.
Jeff Kinney is a #1 New York Times bestselling author of the Diary of a Wimpy Kid series and the Awesome Friendly Kid series. He is a six-time Nickelodeon Kids’ Choice Award winner for Favorite Book and has been named one of Time magazine’s 100 Most Influential People in the World. He spent his childhood in the Washington, D.C., area and moved to New England, where he and his wife own a bookstore named An Unlikely Story.