The Greatest Show on Earth: The Evidence for Evolution (Paperback) 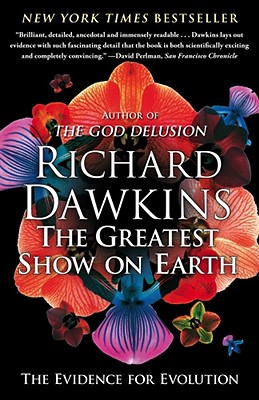 The Greatest Show on Earth: The Evidence for Evolution (Paperback)


Not On Our Shelves, Warehouse ships in 1-5 Days
Richard Dawkins transformed our view of God in his blockbuster, The God Delusion, which sold millions of copies in English alone. He revolutionized the way we see natural selection in the seminal bestseller The Selfish Gene. Now, he launches a fierce counterattack against proponents of "Intelligent Design" in his New York Times bestseller, The Greatest Show on Earth.

"Intelligent Design" is being taught in our schools; educators are being asked to "teach the controversy" behind evolutionary theory. There is no controversy. Dawkins sifts through rich layers of scientific evidence—from living examples of natural selection to clues in the fossil record; from natural clocks that mark the vast epochs wherein evolution ran its course to the intricacies of developing embryos; from plate tectonics to molecular genetics—to make the airtight case that "we find ourselves perched on one tiny twig in the midst of a blossoming and flourishing tree of life and it is no accident, but the direct consequence of evolution by non-random selection." His unjaded passion for the natural world turns what might have been a negative argument, exposing the absurdities of the creationist position, into a positive offering to the reader: nothing less than a master’s vision of life, in all its splendor.
Richard Dawkins is a Fellow of the Royal Society and was the inaugural holder of the Charles Simonyi Chair of Public Understanding of Science at Oxford University. He is the acclaimed author of many books including The Selfish Gene, Climbing Mount Improbable, Unweaving the Rainbow, The Ancestor’s Tale, The God Delusion, and The Greatest Show on Earth. Visit him at RichardDawkins.net.

“Brilliant, detailed, anecdotal and immensely readable . . . Poignant, revealing. Dawkins is canny, funny, and beguiling . . . [He lays] out evidence with such fascinating detail that the book is both scientifically exciting and completely convincing. It's badly needed in this era when the science of evolution is being threatened in our schools.”

“Unambiguous, beautifully argued, with prose like quicksilver. Entertaining. Dawkins emerges like a prize-fighter, knocking out of the ring all objections.”

"This is a magnificent book of wonderstanding: Richard Dawkins combines an artist's wonder at the virtuosity of nature with a scientist's understanding of how it comes to be.'' -- Matt Ridley, author of Nature via Nurture

"'There is grandeur in this view of life,' said Darwin, speaking of evolution. There is no one better qualified to convey this grandeur than his worthy successor, Richard Dawkins, who writes with passion, clarity, and wit. This may be his best book yet." -- V. S. Ramachandran

"To call this book a defense of evolution utterly misses the point: The Greatest Show on Earth is a celebration of one of the best ideas humans have ever produced. It is hard not to marvel at Richard Dawkins's luminous telling of the story of evolution and the way that it has shaped our world. In reading Dawkins, one is left awed at the beauty of the theory and humbled by the power of science to understand some of the greatest mysteries of life." -- Neil Shubin, author of Your Inner Fish

"Up until now, Richard Dawkins has said everything interesting that there is to say about evolution -- with one exception. In The Greatest Show on Earth, he fills this gap, brilliantly describing the multifarious and massive evidence for evolution -- evidence that gives the lie to the notion that evolution is 'only a theory.' This important and timely book is a must-read for Darwin Year." -- Jerry Coyne, author of Why Evolution Is True

"This is the book Richard Dawkins needed to write and many need to read -- a comprehensive account of evolution that faces the difficulties and questions his critics have raised. In it he draws on his great ability to write about science in a way that is clear, absorbing, and vivid." -- Lord Harries of Pentregarth (formerly Bishop Richard Harries)

"With characteristic flair and passion, Dawkins has put on a stunning exhibition of the evidence for evolution. In his own words, 'Evolution is a fact...and no unbiased reader will close the book doubting it.'" -- Dr. Alice Roberts, biological anthropologist, author, and broadcaster

"'...he is an awesome thinker, a superb writer whose explanatory skills I envy, who dismisses his opponents with the thoroughness of a top silk'....A beautifully crafted and intelligible rebuttal of creationism and intelligent design." -- The Times

"Dawkins gathers up the weight of evidence into a huge lump and hurls it at us from the highest heights his rhetoric can scale...his grandness of vision still dazzles." -- The Sunday Telegraph