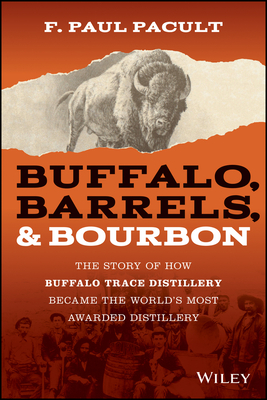 Buffalo, Barrels, & Bourbon tells the fascinating tale of the Buffalo Trace Distillery, from the time of the earliest explorations of Kentucky to the present day. Author and award-winning spirits expert F. Paul Pacult takes readers on a journey through history that covers the American Revolutionary War, U.S Civil War, two World Wars, Prohibition, and the Great Depression.

Buffalo, Barrels, & Bourbon covers the pedigree and provenance of the Buffalo Trace Distillery:

Belonging on the shelf of anyone with an interest in American spirits and history, Buffalo, Barrels, & Bourbon is a compelling must-read.

F. PAUL PACULT has been hailed in Imbibe magazine as "an all-knowing spirituous oracle, a J.D. Powers of liquor" and by Forbes.com as "America's foremost spirits authority." He is an award-winning educator and journalist, as well as the author of seven books, including American Still Life, A Double Scotch, and The New Kindred Spirits. For twenty-eight years, he was the editor of the widely acknowledged "bible" of spirits reviews, F. Paul Pacult's Spirit Journal. He is a Life Member of both the Bourbon Hall of Fame and the Kentucky Distillers Association's Order of the Writ.