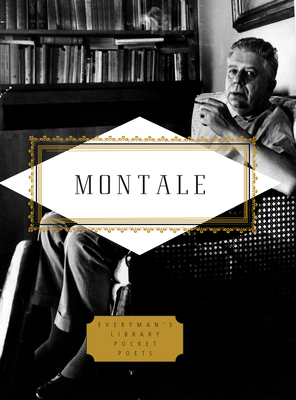 
On Our Shelves Now
A beautiful hardcover Pocket Poets selection of the works of Nobel Prize-winning Italian poet Eugenio Montale, one of the giants of twentieth-century poetry.

Eugenio Montale (1896–1981) is not only Italy’s greatest modern poet but a towering figure in twentieth-century literature. His incandescently beautiful body of work is deeply rooted in the venerable lyric tradition that began with Dante, but he brilliantly reinvents that tradition for our time, probing the depths of love, death, faith, and philosophy in the bracing light of modern history. Dynamic innovation and a coiled, fierce energy fuel the poet’s quest for liberation from the self. Marked by musicality and rhythmic variety, Montale’s poems manage to be buoyant with allusion and metaphor while also densely studded with things—with concrete, elemental images that keep his complex and restless musings firmly tethered to the world.

Montale’s reputation is international and enduring; his widely translated work has profoundly influenced generations of poets around the world. This volume contains selections from all his greatest works, rendered into English by the accomplished poet and translator Jonathan Galassi. It serves as both an essential introduction to an important poet and a true pleasure for lovers of contemporary
EUGENIO MONTALE (1896-1981) was an Italian poet, prose writer, editor and translator, and recipient of the 1975 Nobel Prize in Literature. He is widely considered the greatest Italian lyric poet since Giacomo Leopardi.

JONATHAN GALASSI is the president and publisher of Farrar, Straus and Giroux. He is the author of three poetry collections, including Left-handed: Poems (Knopf, 2012), and has published his translations of the Italian poets Giacomo Leopardi and Eugenio Montale.