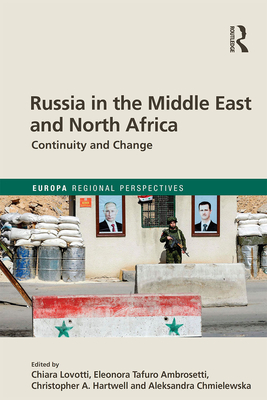 After decades of intense interest and rivalry with the USA, the end of the Cold War and the dismantling of the USSR officially marked a period of significant retreat of Russia from the Middle East and North Africa (MENA). However, with Russia's economic recovery and the entrenchment of President Vladimir Putin, Russia's interest in the region has risen anew. Once again seen as a battleground to contest US hegemony, Russia has expanded its political, military and (to a lesser extent) economic relationships across the region. Most apparent in the military intervention in Syria, Russia has also been engaged with traditional rivals Iran, Saudi Arabia and Turkey, stepping into the vacuum left by the US Obama Administration. Is Russia's reengagement part of a strategy, or is it mere opportunism? Authors with different backgrounds, experiences and origins examine this question via an analysis of the historical drivers of Russian interest in the MENA region and the factors underlying current Russian policies.