Punished With Poverty: The Suffering South - Prosperity to Poverty and the Continuing Struggle (Hardcover) 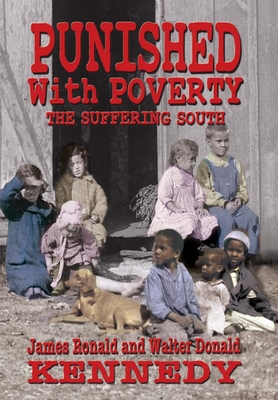 Punished With Poverty: The Suffering South - Prosperity to Poverty and the Continuing Struggle (Hardcover)

From the authors of THE SOUTH WAS RIGHT comes a new edition of what one historian calls one of the most important and original histories of the Southern people. PUNISHED WITH POVERTY tells the unvarnished story of the intentional policy of economic devastation and exploitation of the South which has affected all Southerners, both black and white, long after the close of the "Civil War" and "Reconstruction." In fact, the sad legacy of these punitive policies continues to this very day. The over-arching theme of Southern history is not Race, as is conventionally stated, but Poverty-poverty not due to the South's shortcomings but imposed on them by the system under which they live.

PUNISHED WITH POVERTY is a timely and much needed contribution to the understanding of both the South and the nature of the "Federal Empire" under which all Americans now live.

COMMENTS ON PUNISHED WITH POVERTY

"If enough Southerners would read and take to heart Punished with Poverty, it would bring about a revolution in American politics." - Dr. Clyde N. Wilson, author, publisher, and "Godfather" of Southern History

"Long known for their intellectual fearlessness, the best-selling authors of The South Was Right examine the roots of Southern poverty and the continuing struggle between the Southern culture-Bible believing, conservative and pro-Constitution-and the Federal Empire, which seeks to expand its power and stifle and restrict individual liberty at every opportunity. This eye-opening book focuses on the economic aspects of that struggle (but not exclusively) and should be required reading in every American history course in this country. . ." - Dr. Samuel Mitcham, author of It Wasn't About Slavery: Exposing the Great Lie of the Civil War and The Greatest Lynching in American History: New York 1863

"As the Kennedy's have explained in this impressive book, the Confederate dead were not the only Southerners buried by the War. Lincoln's 'New America' foisted years of poverty on the South and her people, which is why for generations more Southerners considered Reconstruction a greater calamity than the War itself. This book will certainly open your eyes." - Brion McClanahan, Ph.D, author of Southern Scribblings and 9 Presidents Who Screwed Up America

"The numerous photographs of Southern sharecroppers in grinding poverty, malnourished and disease-ridden, along with dirty ragged children, are heart-wrenching. Punished with Poverty shows that their suffering was the deliberate policy of the Federal Government controlled by Northerners who had made their intentions toward the South clear from the beginning: 'We mean to conquer them, Subjugate them, ' make them 'find poverty at their firesides, and see privation in the anxious eyes of mothers and the rags of children.' This book is thoroughly researched and documented and it corrects many egregious untruths promoted by the politically correct. It is a lively read with a strong bibliography and valuable addenda. It greatly enhances one's understanding of the causes of the War Between the States, and the enormous suffering in its aftermath." - Gene Kizer, Jr, author of Slavery Was Not the Cause of the War Between the States, The Irrefutable Argument