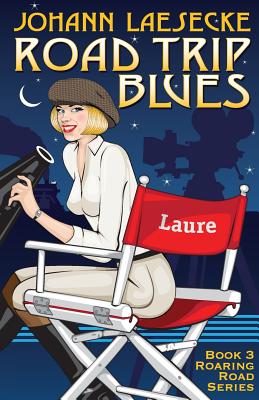 This is book number 3 in the Roaring Road series.

August 1926 - September 1927"What Could Possibly Go Wrong?" Laure and Dan are posilutely sure the good times will roll as they plan and build their future together. Laure receives glowing reviews for her performance in The Great Gatsby movie and the studio offers her roles in two movies with her Hollywood 'cousin' Louise Brooks. More good news arrives when Famous Players-Lasky Studio green-lights film production of their Road Trip Blues movie.Instead of good times, storm clouds roll in. Laure is framed for murder and Road Trip Blues movie production is disrupted. The sabotage escalates until a stuntman is killed and the studio halts production. Laure and Dan defend themselves from a series of attacks designed to ruin them personally but that's just the first stage. The violence intensifies as the unknown villains turn to kidnapping and murder.Laure and Dan's friends from The Roaring Road return in Road Trip Blues to use their talents of deception and trickery to identify and defeat the enemy. Giuseppe, a young man with mysterious connections to Capone's Chicago South Side Outfit offers his help but Laure becomes suspicious when she discovers there is a rat in her crew sending information to their foe. Laure races across the country in their private train to track down the enemy and rescue Dan, who is hunted by a New Jersey mobster and three sadistic railroad cinderdicks. He escapes and learns to ride the rails with Moe and Joe, two fun loving hobos and over-the-hill stage actors who believe vaudeville will make a comeback. If it does, after a stunning and violent fight to the finish will Laure and Dan be there to see it?