A Brief History of a Perfect Future: Inventing the World We Can Proudly Leave Our Kids by 2050 (Hardcover) 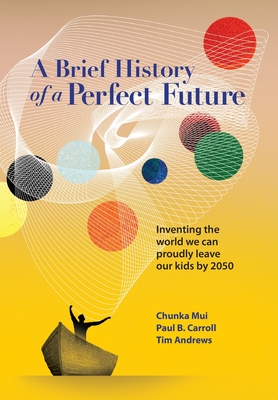 A Brief History of a Perfect Future: Inventing the World We Can Proudly Leave Our Kids by 2050 (Hardcover)

What if, instead of trying to predict the future, we could just pick the one we want - and then invent it? Well, we can. This book describes seven stunning technological advances that will occur by 2050 and shows how to combine them, starting now, to build a future that will let billions thrive.

The smartphone in your pocket could guide 120 million Apollo-era spacecraft to the moon and back, all at the same time. And whatever replaces that phone in 30 years will be a million times more powerful. Many other technologies are on similar trajectories, and the core tools of genomics - which let us understand and even manipulate genetic code - are actually improving far faster, with broad implications for our health, for the foods we eat, and for just about everything else.

How can a person even visualize a MILLION-fold improvement over 30 years, let alone a series of them that will interact with each other in profound ways? The traditional approach has been to think in bite-sized increments, of perhaps three to five years, and to let the rest of the future take care of itself. The authors propose a different way. They propose to harness the future, not to just let it happen.

They do the million-fold imagining for the reader, describing seven so-incredible-as-to-be-almost-magical technological building blocks that will be available to all of us in 2050. These building blocks-in computing, communication, information, genomics, energy, water, and transportation-are following what the authors have dubbed the Laws of Zero. The technologies are increasing in power so fast in cost that you can count on them heading toward zero(ish) cost over the next three decades, meaning that infinite(ish) amounts of those resources will be available.

The book paints visions of how the world could look if we all start planning now and experiment our way toward taking full advantage of the technological marvels that will be available. The authors provide what they call "future histories" - short, provocative "news" articles set in 2050 that describe how key aspects of the world might look in areas such as transportation, health care, climate, and trust.

It's easy to imagine falling into dystopian scenarios, a la those depicted in classics like 1984 and Brave New World. This book provides an optimistic vision of the future, very much grounded in facts and the lessons of history, while showing how individuals, companies, and governments can make this vision a reality.