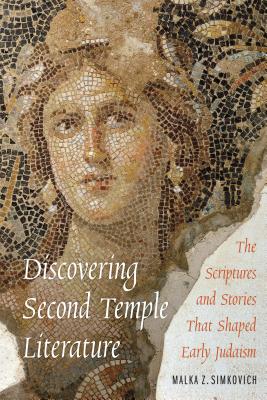 
Not On Our Shelves, Warehouse ships in 1-5 Days
Exploring the world of the Second Temple period (539 BCE–70 CE), in particular the vastly diverse stories, commentaries, and other documents written by Jews during the last three centuries of this period, Malka Z. Simkovich takes us to Jerusalem, Alexandria, and Antioch, to the Jewish sectarians and the Roman-Jewish historian Josephus, to the Cairo genizah, and to the ancient caves that kept the secrets of the Dead Sea Scrolls. As she recounts Jewish history during this vibrant, formative era, Simkovich analyzes some of the period’s most important works for both familiar and possible meanings.

This volume interweaves past and present in four parts. Part 1 tells modern stories of discovery of Second Temple literature. Part 2 describes the Jewish communities that flourished both in the land of Israel and in the Diaspora. Part 3 explores the lives, worldviews, and significant writings of Second Temple authors. Part 4 examines how authors of the time introduced novel, rewritten, and expanded versions of Bible stories in hopes of imparting messages to the people.

Simkovich’s popular style will engage readers in understanding the sometimes surprisingly creative ways Jews at this time chose to practice their religion and interpret its scriptures in light of a cultural setting so unlike that of their Israelite forefathers. Like many modern Jews today, they made an ancient religion meaningful in an ever-changing world.

Malka Z. Simkovich is the Crown-Ryan Chair of Jewish Studies and director of Catholic-Jewish studies at Catholic Theological Union in Chicago. She is the author of The Making of Jewish Universalism: From Exile to Alexandria and has published widely on the topic of Early Judaism.

"Well-designed to act either as a complete summary of the Second Temple corpus or as the first step into a larger world of study, Discovering Second Temple Literature makes its eponymous works fascinating."—Daniel Schindel, Foreword Reviews

"For those unfamiliar with the many divisions within Judaism at that time or with Jewish life in other parts of the Roman Empire, this book offers an excellent introduction to a little-studied time period. Readers of Jewish history will definitely want to add this work to their shelves."—Rabbi Rachel Esserman, Reporter

"This very informative and wonderfully accessible study by Jewish scholar Malka Simkovich, holder of the Crown-Ryan Chair in Jewish Studies at Catholic Theological Union, sheds welcome light on . . . [the Second Temple] period and the significant Jewish writings that emerged from it, including the Dead Sea Scrolls and other so-called pseudepigraphic literature and non-canonical writings. Her reflection on why these texts contribute to a modern understanding of Jewish identity will be of interest not only to Jewish readers but to Christian students of the New Testament as well."—Bible Today

"Whether reappropriating a heritage that was almost lost or discovering one readers never knew existed, this work will likely pique the interest of a broad audience."—James Wetherbee, Library Journal

“In this impressively erudite and popular volume, Simkovich reveals how audiences in the ancient world would have understood the writings of Second Temple authors that are often elusive to us. Moreover, she amply demonstrates why we should care about these works.”—Leonard Greenspoon, Klutznick Chair in Jewish Civilization, Creighton University

“An excellent synthesis. Simkovich’s eminently readable and well-balanced account will help readers understand the contribution of the Apocrypha, Pseudepigrapha, and Dead Sea Scrolls to Judaism and Christianity, as well as period literature in Outside the Bible.”—Lawrence H. Schiffman, Judge Abraham Lieberman Professor of Hebrew and Judaic Studies, New York University, and coeditor, Outside the Bible

“A thorough and very readable introduction to the literature of Second Temple Judaism, Simkovich’s book will fascinate anyone interested in the world of Hillel, Shammai, Josephus, and Jesus.”—Steven Fine, Churgin Professor of Jewish History, Yeshiva University