The Man Who Never Returned (Paperback) 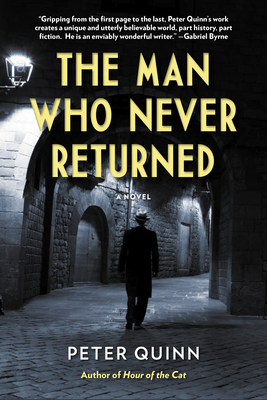 The Man Who Never Returned (Paperback)


On Our Shelves Now
Peter Quinn's The Man Who Never Returned is a noir-ish, stylized detective narrative set in 1950s New York. It follows Fintan, a retired detective turned private investigator who has been given the job of finding Judge Crater, who just went missing in 1930. Based on a real story, it is quite an intriguing tale that was even more so for people living at the time. The famous missing-person case is comparable to the Amelia Earhart missing-person case, though it could have been an even more interesting one. It was alleged that the missing judge may have had information about underhanded dealings in the New York judiciary. It was believed that if such information came to light, Franklin D. Roosevelt, then governor of New York, would have had a hard time becoming the president of the United States. There were also rumors that the judge, who was a known ladies' man, had either decided to disappear or had fallen afoul of the mafia. Featuring hardboiled characters and a beautiful re-creation of New York from the '50s, it is quite a compelling read.
Peter Quinn is a novelist, political historian, and foremost chronicler of New York City. He is the author of Looking for Jimmy: In Search of Irish America and a trilogy of historical detective novels.