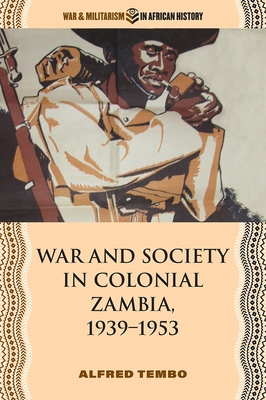 Written from a Zambian perspective, this leading study shows how the British colony of Northern Rhodesia (later Zambia) organized and deployed human, military, and natural resources during and after the Second World War.

The Second World War brought unprecedented pressures to bear on Britain’s empire, which then included colonial Northern Rhodesia. Through new archival materials and oral histories, War and Society in Colonial Zambia tells—from an African perspective—the story of how the colony organized its human and natural resources on behalf of the imperial government.

Alfred Tembo first examines government propaganda and recruitment of personnel for the Northern Rhodesia Regiment, which served in East Africa, Palestine, Ceylon, Burma, and India. Later, Zambia’s economic contribution to the Allied war effort would foreground the central importance of the colony’s mining industry as well as its role as supplier of rubber and beeswax following the fall of the Southeast Asian colonies to the Japanese in early 1942. Finally, Tembo presents archival and oral evidence about life on the home front, including the social impact of wartime commodity shortages, difficulties posed by incoming Polish refugees, and the more interventionist forms of colonial governance that these circumstances engendered.

“In this first comprehensive study of Zambia during the Second World War, Alfred Tembo has produced a text that is both elegantly written and based upon meticulous and well-presented original research. Throughout, Tembo makes seamless linkages between the grand political/strategic levels and the ‘on the ground’ participation in the conflict of this important African colony. The accessibility of its presentation makes this book ideal for academics, historians, and general interest readers alike.”—Ashley Jackson, professor of imperial and military history, King's College London, and visiting fellow, Kellogg College, University of Oxford

“Alfred Tembo sheds light on how the Second World War affected Zambian society in this excellent study. Based on a close reading of hitherto underutilized Zambian archives, this book is essential reading for students and scholars with an interest in the effects of the war in a colonial context.”—Andrew Cohen, coauthor of Labour and Economic Change in Southern Africa, c.1900–2000: Zimbabwe, Zambia, and Malawi