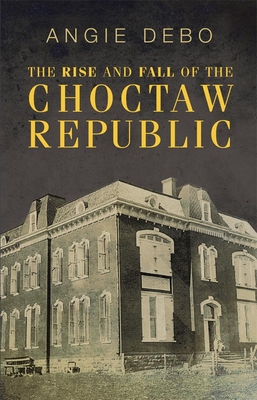 
Not On Our Shelves, Warehouse ships in 1-5 Days
Here is the story of the Choctaws, a proud and gifted tribe among the Five Civilized Tribes of Indians. It is the record of a people whose forced migration from their ancestral homes in the South to what is now Oklahoma and whose subsequent efforts from the Civil War to the close of the century to maintain an autonomous government and institutions form a distinctive and arresting chapter in the history of the West. While the political, social, and economic customs of the Choctaws were closely circumscribed, the thread of Choctaw history was at all times closely interwoven witht he larger fabric of American history as a whole. Choctaw law was a curious combination of ancient tribal custom and Anglo-American legal practice; Choctaw churches and schools were copied almost wholly from the white man's society; and Choctaw economic institutions represented an attempt to adjust the customs of tribal control of the land to the white system of individual ownership. Angie Debo was reared in a pioneer community, at Marshall, Oklahoma, where it has been her privilege to know from childhood the folkways of the Indians and the traditions of the western settlers. A member of her community high school's first graduating class, she later attended the University of Oklahoma, where she was a Phi Beta Kappa, and took her B.A. and later her Ph.D. degree; she received her master's degree from the University of Chicago. Her education was combined with intervals of teaching in country schools, starting at the age of sixteen. Miss Debo's distinguished reputation as a regional scholar has been enhanced by her book, The Rise and. Fall of the Choctaw Republic, which won the John H. Dunning prize of the American Historical Society for the best book submitted in the field of United States history in 1934, and for her later, book, And Still the Waters Run. She has been a teacher in schools and colleges both in Oklahoma and Texas and was curator of the Panhandle-Plains Historical Museum in Canyon, Texas. More recently she has been state director of the Federal Writers' Project in Oklahoma, in which capacity she edited Oklahoma: A Guide to the Sooner State for the American Guide Series. "A remarkable, poignant and inspiring story." -- New York Herald-Tribune "This competent volume will be of value to all who are interested in our American Indian heritage." -- Tulsa World "A masterful history of the Choctaw Indians in the Indian Territory. . . . a smooth, enjoyable narrative and an excellent bibliography." -- Journal of Mississippi History "There is probably no better history of this tribe . . . a milestone." -- Colorado Springs Free Press.