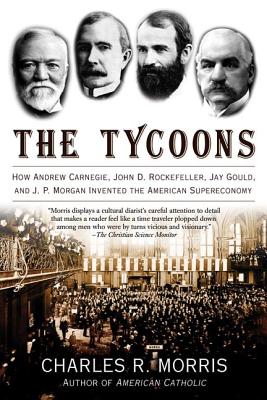 "Makes a reader feel like a time traveler plopped down among men who were by turns vicious and visionary."—The Christian Science Monitor

The modern American economy was the creation of four men: Andrew Carnegie, John D. Rockefeller, Jay Gould, and J. P. Morgan. They were the giants of the Gilded Age, a moment of riotous growth that established America as the richest, most inventive, and most productive country on the planet.

Acclaimed author Charles R. Morris vividly brings the men and their times to life. The ruthlessly competitive Carnegie, the imperial Rockefeller, and the provocateur Gould were obsessed with progress, experiment, and speed. They were balanced by Morgan, the gentleman businessman, who fought, instead, for a global trust in American business. Through their antagonism and their verve, they built an industrial behemoth—and a country of middle-class consumers. The Tycoons tells the incredible story of how these four determined men wrenched the economy into the modern age, inventing a nation of full economic participation that could not have been imagined only a few decades earlier.

Charles R. Morris is the author of several books including Tycoon, American Catholic and Money, Greed, and Risk. He is a lawyer and former banker, and was president of a financial services software company. A regular contributor to the Los Angeles Times, he has also written for The Wall Street Journal and The Atlantic Monthly. He lives in New York City.

“Superb . . . Gracefully and eloquently clarifies these men's frequently misunderstood roles in the shaping of modern U.S. commerce.” —The Providence Journal