Missing from the Village: The Story of Serial Killer Bruce McArthur, the Search for Justice, and the System That Failed Toronto's Queer Community (Paperback) 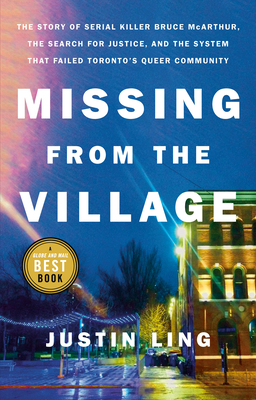 Missing from the Village: The Story of Serial Killer Bruce McArthur, the Search for Justice, and the System That Failed Toronto's Queer Community (Paperback)


Send us an inquiry for availability information on this title!
A Globe and Mail Top 100 Book
Shortlisted for the 2021 Toronto Book Awards
An Indigo Best Book of 2020
Winner of the Brass Knuckles Award for Best Nonfiction Crime Book (Crime Writers of Canada Awards of Excellence)


The tragic and resonant story of the disappearance of eight men--the victims of serial killer Bruce McArthur--from Toronto's queer community.

In 2013, the Toronto Police Service announced that the disappearances of three men--Skandaraj Navaratnam, Abdulbasir Faizi, and Majeed Kayhan--from Toronto's gay village were, perhaps, linked. When the leads ran dry, the search was shut down, on paper classified as "open but suspended." By 2015, investigative journalist Justin Ling had begun to retrace investigators' steps, convinced there was evidence of a serial killer. Meanwhile, more men would go missing, and police would continue to deny that there was a threat to the community. In early 2019, landscaper Bruce McArthur was sentenced to life in prison for the murders of eight men. There is so much more to the story than that.

Based on more than five years of in-depth reporting, Missing from the Village recounts how a serial killer was allowed to stalk the city, how the community responded, and offers a window into the lives of these eight men and the friends and family left behind. Telling a story that goes well beyond Toronto, and back decades, Justin Ling draws on extensive interviews with those who experienced the investigation first-hand, including the detectives who eventually caught McArthur, and reveals how systemic racism, homophobia, transphobia, and the structures of policing fail queer communities.
JUSTIN LING is an investigative journalist whose reporting has focused on stories and issues undercovered and misunderstood. His writing has appeared in the Globe and Mail, the National Post, the Guardian, Foreign Policy, and elsewhere. In 2019 he hosted "The Village," the award-winning third season of the CBC podcast Uncover, which examined cold cases from the 1970s that were reopened as a result of the McArthur investigation.
Named a Top 100 Best Book by The Globe and Mail

“Missing from the Village bears respectful witness to this terrible story, from the sights and sounds of the night the first man disappeared to the plaintive and heart-wrenching victim-impact statements following McArthur’s guilty plea in court. Ling provides a worthy record of an unfathomable tragedy.” —Quill & Quire, starred review

“Justin Ling’s Missing from the Village is a careful, infuriating book documenting the murder of eight men in Toronto and the police inaction that failed to protect the community.” —Xtra

“Based on more than five years of in-depth reporting, this is also a story of police failure, of how the queer community responded, and the story of the eight men who went missing and the lives they left behind. In telling that story, Ling uncovers the latent homophobia and racism that kept these cases unsolved and unseen. This gripping book . . . also reveals how police agencies across the country fail to treat missing person cases seriously, and how policies and laws, written at every level of government, pushed McArthur's victims out of the light and into the shadows.” – Ruth Sutherland, The Daily Mail