A Borrowed Man: A Novel (Paperback) 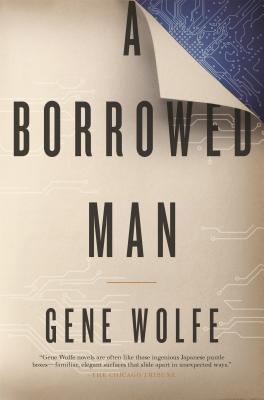 A Borrowed Man: A Novel (Paperback)

A Borrowed Man: a new science fiction novel from Gene Wolfe, the celebrated author of the Book of the New Sun series.

It is perhaps a hundred years in the future, our civilization is gone, and another is in place in North America, but it retains many familiar things and structures. Although the population is now small, there is advanced technology, there are robots, and there are clones.

E. A. Smithe is a borrowed person. He is a clone who lives on a third-tier shelf in a public library, and his personality is an uploaded recording of a deceased mystery writer. Smithe is a piece of property, not a legal human.

A wealthy patron, Colette Coldbrook, takes him from the library because he is the surviving personality of the author of Murder on Mars. A physical copy of that book was in the possession of her murdered father, and it contains an important secret, the key to immense family wealth. It is lost, and Colette is afraid of the police. She borrows Smithe to help her find the book and to find out what the secret is. And then the plot gets complicated.

Gene Wolfe (1931-2019) was the Nebula Award-winning author of The Book of the New Sun tetralogy in the Solar Cycle, as well as the World Fantasy Award winners The Shadow of the Torturer and Soldier of Sidon. He was also a prolific writer of distinguished short fiction, which has been collected in such award-winning volumes as Storeys from the Old Hotel and The Best of Gene Wolfe.

A recipient of the World Fantasy Award for Life Achievement, the Edward E. Smith Memorial Award, and six Locus Awards, among many other honors, Wolfe was inducted into the Science Fiction Hall of Fame in 2007, and named Grand Master by the Science Fiction and Fantasy Writers of America in 2012.

“Gene Wolfe has always been one of the most inventive and literary science fiction writers of our day.” —SFRevu

“Wolfe (The Land Across) builds this SF noir into a strange, unsettling story, deceptively simple and old-fashioned in style and plot, but full of disturbing details that are intensified by the deadpan humor and matter-of-fact flatness of Smithe’s narrative voice.” —Publishers Weekly

“Best known for his four-volume Book of the New Sun series, Wolfe is often regarded as one of speculative fiction’s most literary craftsmen, infusing his works with multiple layers of meaning. Without relinquishing his superlative skill at creating interesting characters while spinning a good story, Wolfe offers a refreshing change of pace here with a futuristic mystery novel featuring an unusual first-person narrator.” —Booklist

“The best thing about A Borrowed Man is the way its not-human hero grips your sympathy … Don’t ask what happens if he’s returned overdue. Librarians hate when that happens.”—Tom Shippey of the Wallstreet Journal

“Wolfe is a grand master of the genre, and this is an absorbing tale, full of noirish elements and fun sf flourishes.” –Library Journal