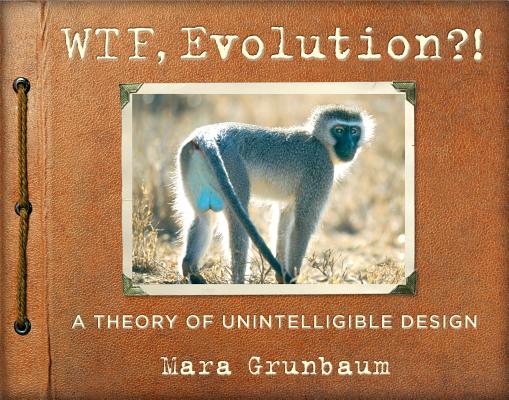 We all have our off days. Why should Evolution be any different? Maybe Evolution got carried away with an idea that was just a little too crazy—like having the Regal Horned Lizard defend itself by shooting three-foot streams of blood from its eyes. Or maybe Evolution ran out of steam (Memo to Evolution: The Irrawaddy Dolphin looks like a prototype that should have been left on the drawing board). Or maybe Evolution was feeling cheeky—a fish with hands? Joke’s on you, Red Handfish! Or maybe Evolution simply goofed up: How else to explain the overgrown teeth of the babirusas that curl backward over their face? Oops.

Mara Grunbaum is a very smart, very funny science writer who celebrates the best—or, really, the worst—of Evolution’s blunders. Here are more than 100 outlandish mammals, reptiles, insects, fish, birds, and other creatures whose very existence leaves us shaking our heads and muttering WTF?! Ms. Grunbaum’s especially brilliant stroke is to personify Evolution as a well-meaning but somewhat oblivious experimenter whose conversations with a skeptical narrator are hilarious.

For almost 4 billion years, Evolution has produced a nonstop parade of inflatable noses, bizarre genitalia, and seriously awkward necks. What a comedian!

Mara Grunbaum is a science writer and editor who’s covered everything from the biology of whiskers to mining palladium on the moon. Her work has appeared in Popular Science, Discover magazine, OnEarth, ScientificAmerican.com, and other publications and websites. She is a graduate of New York University’s master’s program in Science, Health, and Environmental Reporting, and lives in Brooklyn, New York.