How Zoologists Organize Things: The Art of Classification (Hardcover) 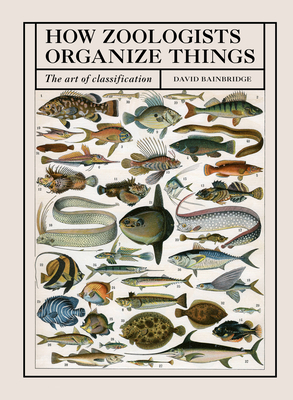 How Zoologists Organize Things: The Art of Classification (Hardcover)


Not On Our Shelves, Warehouse ships in 1-5 Days
Humankind’s fascination with the animal kingdom began as a matter of survival – differentiating the edible from the toxic, the ferocious from the tractable. Since then, our compulsion to catalogue wildlife has played a key role in growing our understanding of the planet and ourselves, inspiring religious beliefs and evolving scientific theories. The book unveils wild truths and even wilder myths about animals, as perpetuated by zoologists – revealing how much more there is to learn, and unlearn.

Long before Darwin, our ancestors were obsessed with the visual similarities and differences between the animals. Early scientists could sense there was an order that unified all life and formulated a variety of schemes to help illustrate this. This human quest to classify living beings has left us with a rich artistic legacy, from the folklore and religiosity of the ancient and Medieval world through the naturalistic cataloging of the Enlightenment to the modern, computer-generated classificatory labyrinth.

This book tells the fascinating, visual story of this process. The wonderful zoological charts reflect prevailing artistic trends and scientific discoveries, as well as telling us as much about ourselves as they do about the creatures depicted.

David Bainbridge is a reproductive biologist, popular science writer, and the Clinical Veterinary Anatomist, the world-top-ranked Department of Physiology, Development and Neuroscience at the University of Cambridge. As well as many academic and clinical publications, he has written seven popular science books, widely reviewed, discussed and translated. He is a fellow of St Catharine’s College, Cambridge, whose alumni include John Ray, the originator of the biological term “species.” David Bainbridge is the definitive voice on zoology classification.

"With amazing artwork on every page, Bainbridge’s book traces man’s quest to classify animals and explain their similarities and differences in art ranging from sketches to painting to computer images."—Marcus Schneck, PennLive

"...this book is highly recommended for general readers wanting a visual introduction to the classification of living species."—Booklist

"Thoroughly 'reader friendly' in organization and presentation, "How Zoologists Organize Things: The Art of Classification" will prove to be a unique and welcome addition to personal, professional, high school, community, college, and university library Contemporary Science collections in general, and zoology supplemental curriculum reading lists in particular."—Midwest Book Review

"While not classified as ‘light reading,’ How Zoologists Organize Things by British author David Bainbridge is a fascinating lookat humanity’s struggle to understand the animals with which we share theworld."—WhiteTail Magazine

“This book is so much more than an explanation of the title; it is a visual feast. Every page has carefully chosen and beautifully reproduced illustrations. The author has selected from a huge range of zoological material and has included medieval bestiaries from as early as the 1200s, to present-day genetics diagrams which are in themselves a visual delight, to subtly coloured electron microscope photographs of chromosomes. The text is well written and concise, giving a clear interpretation of the illustrations and enough background to enable one to understand something of the many zoologists who created numerous ways to understand the natural world of animals. This is a worthwhile account covering the work of many of the scientists, from a Western perspective, who have over the ages attempted to illustrate the order in Earth’s animal biodiversity. 5 stars”
—Ray Heaton, The Fortean Times