The Next Shift: The Fall of Industry and the Rise of Health Care in Rust Belt America (Hardcover) 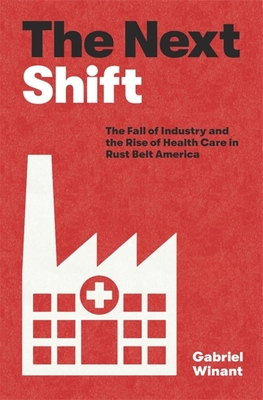 The Next Shift: The Fall of Industry and the Rise of Health Care in Rust Belt America (Hardcover)

Winner of the Frederick Jackson Turner Award
Winner of the Isaac and Tamara Deutscher Memorial Prize
Winner of the C. L. R. James Award
A ProMarket Best Political Economy Book of the Year

Men in hardhats were once the heart of America's working class; now it is women in scrubs. What does this shift portend for our future? Pittsburgh was once synonymous with steel. But today most of its mills are gone. Like so many places across the United States, a city that was a center of blue-collar manufacturing is now dominated by the service economy--particularly health care, which employs more Americans than any other industry. Gabriel Winant takes us inside the Rust Belt to show how America's cities have weathered new economic realities. In Pittsburgh's neighborhoods, he finds that a new working class has emerged in the wake of deindustrialization. As steelworkers and their families grew older, they required more health care. Even as the industrial economy contracted sharply, the care economy thrived. Hospitals and nursing homes went on hiring sprees. But many care jobs bear little resemblance to the manufacturing work the city lost. Unlike their blue-collar predecessors, home health aides and hospital staff work unpredictable hours for low pay. And the new working class disproportionately comprises women and people of color. Today health care workers are on the front lines of our most pressing crises, yet we have been slow to appreciate that they are the face of our twenty-first-century workforce. The Next Shift offers unique insights into how we got here and what could happen next. If health care employees, along with other essential workers, can translate the increasing recognition of their economic value into political power, they may become a major force in the twenty-first century.