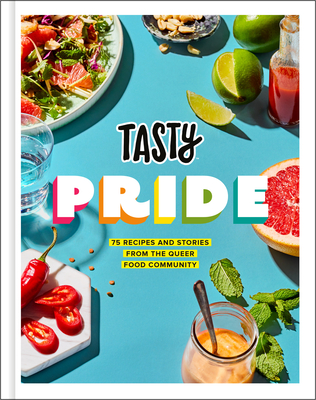 
Send us an inquiry for availability information on this title!
Be proud, be loud, be flavorful. From the beloved, fiercely inclusive BuzzFeed cooking brand comes 75 innovative recipes and inspiring stories from prominent LGBTQ+ cooks and foodies.

Tasty has always been the place to turn for good eats. Now, it’s also the place to turn for a community. Here, stories of love, pride, and acceptance—and the important role that food can play in that journey—accompany the innovative yet totally doable recipes you know to expect from Tasty.

Compiled by food writer Jesse Szewczyk and contributed by 75 cooks and celebrities from across the queer community such as Ted Allen, Anita Lo, and Rick Martinez, these recipes are not only delicious, but also meaningful. These folks bring you the dishes they love most, from Taco Potatoes with Spicy Ground Turkey to Everything Bagel Beignets, and from Beer-Steamed Crabs with Spicy Vinegar Dipping Sauce and Corn Salad to Fudgy Miso Brownies.

Pull up a chair and take your seat at the table with Tasty Pride.
Jesse Szewczyk is a food writer and recipe developer based in New York. He graduated from The Culinary Institute of America and has had work published in Bake from Scratch, BuzzFeed, Food52, The Kitchn, Honest Cooking, Tasty, and several other publications.

Tasty is the world’s largest social food network, reaching more than 500 million people around the globe with its signature fun, easy, and delicious video recipes. The brand is focused on making cooking practical and accessible for beginner cooks and expert chefs alike. Launched in 2015, Tasty has attracted more than sixty-five billion video views and is the biggest franchise on Facebook, reaching one in four users every month. It has studios in Los Angeles, New York, London, Paris, Berlin, Mexico City, and São Paulo, and a full product line including cookbooks, a smart appliance, and a mobile app.
“It is rare for recipe headnotes to carry so much heart and vulnerability in 100 words or so, but Tasty Pride does it again and again, giving us accessible recipes and stories about resilience, acceptance and self-discovery.”—Mercury News