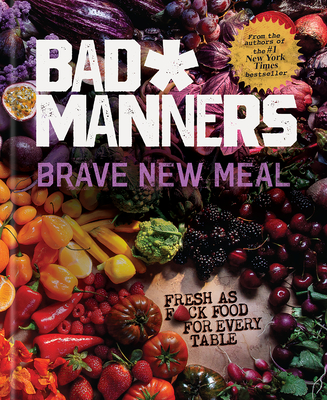 
On Our Shelves Now
The New York Times bestselling authors of the Bad Manners cookbook series are back with a message for you (yeah, you): Eating less meat, saving the planet, and cooking at home don’t have to be so f*cking boring—or expensive.

If it feels like everything’s so f*cked that you just wanna lay down and let the earth reclaim your body, we understand. A global pandemic forced all of us back into the kitchen but our fridges were full of by-products and fake flavors. It seems like half the ingredients and produce we buy goes in the trash while people starve, the planet burns and also somehow floods. And our culinary chaos is partly to blame. This sh*t isn't sustainable.

Enter Brave New Meal: a chance for food to be not just different but better. Because here’s the dirty little secret about eating vegan (or plant-based, meatless, flexitarian, whatever the hell they’re calling it this week): done right, it’s the cheapest, healthiest, most environmentally friendly, and tastiest (did we stutter?) food you could possibly put into that temple you call a body. Brave New Meal shows you the way:

• 100+ life-changing vegan recipes including Orange Peel Cauliflower, Beeteroni Pizza, Nashville Hot Shroom Sammie, Jackfruit Pupusas, and Plum-Side-Down Cake
• Killer photos so you’ll know for sure you didn’t f*ck it up
• Tips on how to stretch your budget, limit food waste, and incorporate every edible piece of the plant into your meals (or finally find a use for that wilted kale in your fridge)
• Shortcuts and substitutions for when the grocery store is sold out or you need help getting dinner on the goddamn table already
• A produce glossary that breaks down everything you probably never knew (but most def should) about all the fresh stuff in your market

Look, we’re not asking you to go vegan. We’re not even asking you to give up bacon (do whatever you gotta do). But just be real honest when you answer this question: What do you have to lose?
Bad Manners blew up the Internet back in 2012, when they first began blogging. Their first cookbook was a #1 New York Times bestseller. They are based in Los Angeles, California.
“The folks at Bad Manners (Thug Kitchen) give all the f*cks as they ardently advocate for a plant-based diet in this irreverent and enticing guide . . . Recipes range from breakfast to dinner and sweets, scouring the world for inspiration and subverting ‘constructs’ along the way. Spaghetti’s served for breakfast, while a smashed cucumber salad cools things down when it’s ‘hotter than hell outside.’ Sticky tofu with sweet sesame sauce (essentially a ‘cake made of beans’) puts a healthy spin on takeout, and strawberry rosewater cheesecake takes the sting out of the idea of being gluten-intolerant.”—Publishers Weekly