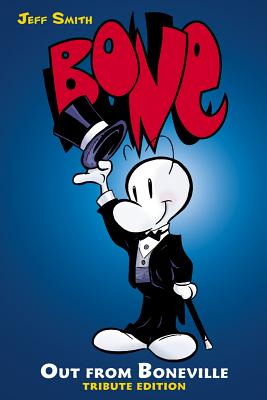 This is book number 1 in the Bone series.

A special edition of the NEW YORK TIMES bestselling graphic novel that launched Scholastic's Graphix imprint. Includes 32 pages of bonus artwork, including a brand-new illustrated poem by Jeff Smith!In 2005, Scholastic launched Graphix with the publication of Jeff Smith's BONE in full color. To celebrate ten years of publishing, we offer this special tribute edition of OUT FROM BONEVILLE. Rediscover the world of BONE . . . or explore it for the first time. Join Fone Bone, Phoney Bone, and Smiley Bone at the beginning of their incredible journey filled with wonderful and terrifying creatures.And as an extra treat, inside you'll find minicomics and artwork inspired by BONE, created by 16 bestselling, award-winning artists.
Jeff Smith is the creator of the award-winning, New York Times bestselling BONE series. He was born and raised in the American Midwest and learned about cartooning from comic strips, comic books, and TV animation. Visit him online at boneville.com.
Named a top ten graphic novel by TIME magazine"This is first-class kid lit: exciting, funny, scary, and resonant enough that it will stick with readers for a long time." --PUBLISHERS WEEKLY"BONE is storytelling at its best, full of endearing, flawed characters whose adventures run the gamut from hilarious whimsy . . . to thrilling drama." --ENTERTAINMENT WEEKLY"Jeff Smith can pace a joke better than almost anyone in comics." --Neil Gaiman, winner of the Newbery Medal for THE GRAVEYARD BOOK